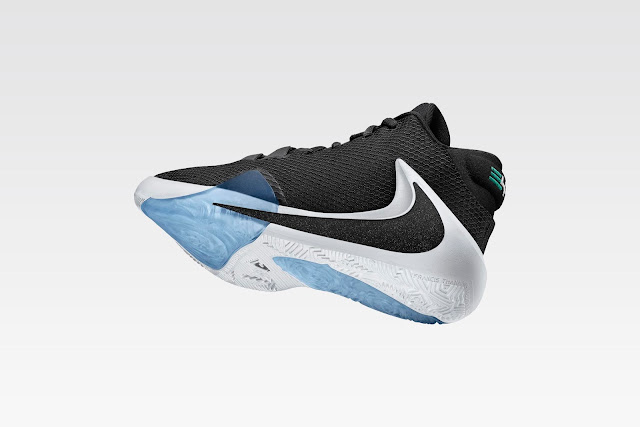 MANILA--With his break-out season being capped off with the NBA Most Valuable Player Award, the Milwaukee Bucks' Giannis Antetokounmpo joins an elite club of Nike athletes as he now unveils his first signature shoe - the Air Zoom Freak 1.

Decked with double-stacked Zoom Air units under the heel, a multidirectional traction pattern, and a rubber clip that extends from the outsole up through the midsole, the Greek Freak's first signature shoe contain subtle elements that are fundamental to serving his unique style of play.

"He's using space with great efficiency," said Ross Klein, Nike's senior creative director for basketball footwear. "He uses length to take defender's off of their position. In a euro step, for example, he can pull a defender one way and because his left step — the lethal step — is so long, he cuts a huge, almost two-step, advantage."

It also honors his love of another signature shoe line from the brand.

"Since I was little I have been wearing the Kobes. The fit, feel, and function has always been comfortable to me," he said.

"We wanted to heighten the sensation Antetokounmpo has loved in the Kobe," added Klein.

The newest sneaker from Nike will also feature his own logo.

Its pattern is built from a repeat of the Antetokounmpo primary logo, an interlocked 'G' and 'A' that gives homage to his family name.

"In a logo, you can put a lot of things together and talk about your life — represent family, represent Nigeria and Greece. That is exciting," said Antetokounmpo.

Negative space is used to reflect the path he took on the long journey to where he is now, while the clipped corner of the 'G' references his anomalous athletic talents.

He is named the 'Greek Freak' after all for his singular combination of length and agility.

The first colorway of the Air Zoom Freak 1 is called the 'All Bros' and will be released on Saturday at select Nike retailers and Titan. Retail price is PHP6,295.

More colorways are slated to release in the coming weeks.