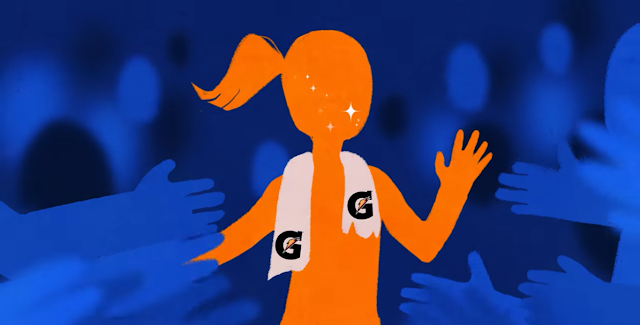 By Dugout Philippines
MANILA--It’s been an eventful month of March. Aside from the worldwide pandemic and lockdowns, it’s also observed as International Women’s Month – which Gatorade and its creative agency DDB MNL capped off with an inspiring animated video that cheered on young women to keep going.
Gatorade’s "Nothing Beats Girls" digital video derives inspiration from the country’s countless female athletes and harnesses the power of animation and poetic lyricism to illustrate the self-doubts, worries, struggles, as well as triumphs that women go through in their respective journeys to become the queens that they are.
“In these trying times, the toughest girls blaze through. This is a salute to every single female with a fight to conquer. You are greater than your fears, insecurities, doubts, haters, worst games, setbacks, excuses, and mistakes,” was the resounding message from the animation.
The video uploaded in Gatorade’s social media accounts is part of the brand’s yearly campaign with UAAP volleyball athletes, breaking the glass ceiling of females in sports. Originally intended to motivate younger girls to get into competitive sports, the new video turns out to be something even more empowering given the current pandemic and the challenges that come with it.
“During this crisis, when everything is put on hold, athletes feel the void of separation from their beloved sports and teammates. We hope this video will inspire them to become better athletes so when the lockdowns are over, they are mentally and emotionally prepared for a comeback. This resonates as well with non-athletes who are also caught up in the hysteria of this pandemic, proving that the simplest messages have the strongest impact,” said Gatorade marketing director Mikey Rosales.
“We salute all females for their enduring spirit that helps them overcome whatever obstacles may come their way. They are our mothers, our sisters, our teachers, our nurses, our doctors, our artists, our athletes, and all the women out there who strive to conquer their battles the best way they can. We at Gatorade are privileged to be able to share their struggles and victories,” he added.
A brand that has fueled athletic achievement for over 45 years with its signature line of sports drinks, Gatorade has always been alongside global and local athletic elites, and this is one of the first times the brand has locally tackled stories of young female athletes still trudging on to find greatness. This just shows that Gatorade is not just about males and champion athletes, but it is for anyone who is into sports – whether pro or just trying out, and for all genders at that.
Watch the video here:
Follow the site on Twitter: @DugoutPH