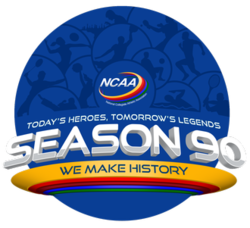 
Letran got a sigh of relief at the final buzzer as it escaped with a 75-73 win against San Sebastian to keep its NCAA Final Four hopes alive at the FilOil Flying V Arena.

Mark Cruz shot a three-pointer to increase Letran's lead back to five, but San Sebastian free throws brought the edge back to two, with 1:15 left in the match.

Rey Publico scored on a field goal to put the Knights' advantage back to four, 74-70. The Knights added another free throw to put the lead back to five.

Jovit Dela Cruz, however, converted on a three-point play with 6.2 seconds left to cut the lead to two anew, 75-73.

Kevin Racal missed two crucial free throws on the other end, setting up the Stags' final crack to tie the game.

Bobby Balucanag ran the full length of the court to score what could have been the equalizing layup, but the referees nullified the field goal as he released the ball after time expired.

Racal led Letran, which moved up to 6-7, with 20 points and two rebounds.