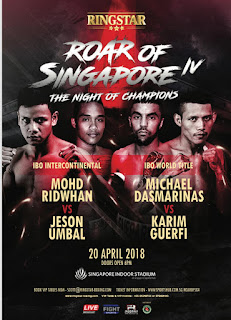 MANILA--Another Filipino will be featured in the fight card that will feature Michael Dasmarinas' first world title shot.

Jeson Umbal goes up against hometown favorite Muhamad Ridhwan at Roar of Singapore 4: The Night of Champions at the Singapore Indoor Stadium on April 20.

Umbal and Ridhwan will vie for the IBO intercontinental featherweight title, which will draw one of them closer to the IBO world featherweight belt.

While Ridhwan remains perfect at 9-0, Umbal is actually ranked higher than Ridhwan in the IBO rankings, making this fight an interesting attraction before Dasmarinas takes on Karim Guerfi of France for the IBO bantamweight title.