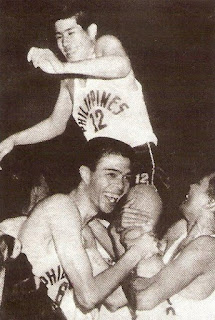 MANILA -- Danny Florencio, one of the PBA's all-time elite scorers, passed away on Saturday at age 70 in San Francisco, California.

Florencio, known by the monikers "Daredevil Danny" and the original "Skywalker", became well known during his collegiate, professional, and national team careers for his hangtime moves and mid-range jumpers that made him one of basketball's big scoring machines during the 70's.

The 5-foot-10 former UST King Goldie starred for YCO and Crispa in MICAA before becoming one of the holdovers of U-Tex who were directly brought to the PBA when the league was founded in 1975.

Arguably, his best moment in the PBA came in 1977 when he, still playing for the original 7-Up franchise, dropped 64 points against Toyota, which stood as the most scored by a local until 1989. Interestingly enough, Florencio was acquired by Toyota the following year to backstop the team's "Big 3" of Mon Fernandez, Francis Arnaiz, and Robert Jaworski, who like Florencio also played for Crispa before starring for its archrival.

Florencio, who was a member of the last Philippine national seniors basketball team that made it to the Summer Olympics in 1972, retired in 1983 and was named among the 40 Greatest Players in PBA History. He was inducted to the PBA Hall of Fame in 2007.