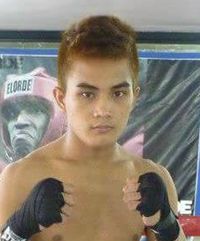 QUEZON CITY--Roldan Aldea was named by GAB as the Boxer of the Month for February.

In a copy of GAB's official monthly ratings obtained by Dugout Philippines on Tuesday night, the 24-year-old pug from Kabankalan was given the monthly citation following his successful Philippine lightweight title conquest on Feb. 11 in Paranaque.

Aldea knocked out Nathan Bolcio for the vacant belt in the main event of a fight card organized by Elorde International Promotions and Misako Promotions at the Elorde Sports Center in the said city.

Aldea, who now boasts a 12-1-4 win-draw-loss record, is to defend his newly-won belt against the top-ranked Philippine lightweight contender Jonel Alibio.

However, Aldea will move up a weight level for the meantime as he travels to Yokohama to face unbeaten super lightweight boxer Shawn Oda on April 15 as part of a fight card that will feature two world title fights.