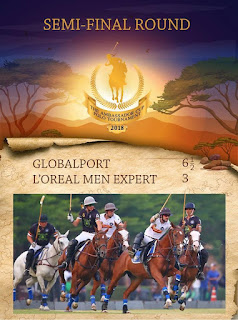 BANGKOK--Globalport galloped past L’Oreal Men Expert Friday evening, 6 ½-3, in the semifinal round of the Ambassador Cup Polo Tournament hosted by the Thailand Polo Association, to advance to the finals on Saturday.

Team Globalport’s finals match will be against the King Power team which cast aside Ahmibah in their semis match, 11-8.

Nine international teams are participating in this year’s Ambassador Cup.

The fields of the VS Sports Club and the Siam Polo Club are venues of the tournament.

The Ambassador Cup is the second major polo tournament of Team Globalport and Rep. Mikee Romero of the 1-PACMAN Party-list.

Last January, they placed second in the All Asia Cup, also in Bangkok, while Romero was named the Most Valuable Player.