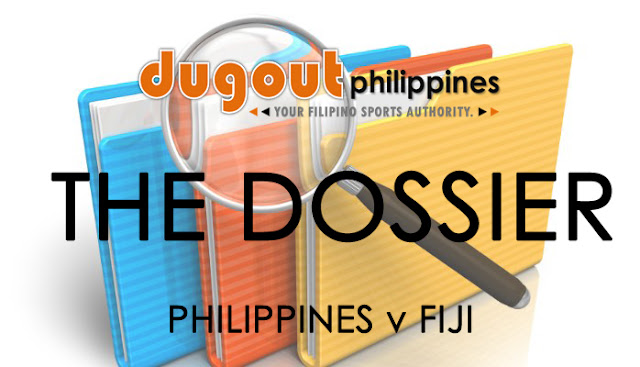 AFTER a long break, The Dossier is back.

With the magnitude of the matches in this month for our own Azkals, a preview of those tiffs is a necessity for us, with a place in Pinoy sporting history is on the line.

Without any sideshows, we begin.

FIJI: Who are they?
Fiji's national side, nicknamed the Bula Boys, are ranked 168th in the world according to FIFA. That is 46 places below us.

However, Thursday's tiff with the OFC side is a perfect starter to our main course, which is the final Asian Cup qualifier against Tajikistan on Holy Tuesday.

Managed by Frenchman Christophe Gamel, Fiji will be led by forward Roy Krishna who skippers A-League's Wellington Phoenix and has found the net 20 times in 32 caps for the South Pacific island-nation.

Despite being in the bottom half in the pecking order of their confederation, Fiji had appeared in the Olympics two years ago, with Krishna scoring their lone strike as they went out on group stage by dropping all of their fixtures.

Finally, a proper Azkals experiment
As the Azkals commence with training camp over the weekend, Thomas Dooley now had a perfect time to experiment and test his squad, in which the core came from the PFL clubs, but none came from JPV Marikina, who are the surprise league leaders with just three matches in to the new season.

The squad that was released reaffirms his trust with the men who are familiar with his system, despite numerous criticisms on the lack of form in some which was the prime reason for their dismal ending to 2017 with three straight draws in the qualifiers. Fortunately for him, he was not there in what fans called as "Tragedy in Taipei" on the day the Philippines shocked Southeast Asia in Hanoi.

However, the squad will have one new face in Michael Falkesgaard. The Danish-born shot-stopper is having a decent start to the season with Thailand's Bangkok United, and is on the radar for us since 2011 when he was at Brondby.

Camelo Tacusalme is back in the fold for the squad since he was thrown to the lions in Guangzhou last year, and he will have his hands full as the only natural centre-back in the lineup with Amani Aguinaldo was scratched due to his long-term knee injury.

With Tajikistan watching, he now has the opportunity to test the side for the new-look AFF Championship at the end of the year. So we might have a different Azkals to play.

A CALL TO SUPPORT.

In the past two years post-Suzuki Cup, football in the country is on a virtual roller-coaster ride, with media appearances became rare by the coming day.

Despite the PFL's launch, the sport is being brushed aside time and time again as we endured a rough end to the year were the senior side only won once since June.

With the results not going their way, team manager Dan Palami takes time to call on the 12th man to turn up and watch both of the matches in the month of March.

"This sport deserves all the support it can get," he said, knowing that avoiding defeat against the Tajiks on Holy Week will bring us to the Asian Cup for the very first time.

Yes, the Azkals are not at full strength, but that is not an excuse for us to take Fiji lightly.

Despite not having Neil, Javi and Sato, the home side might come to the Tajikistan tiff on a back of a win against the Pacific island side, might be 2-0 the most.