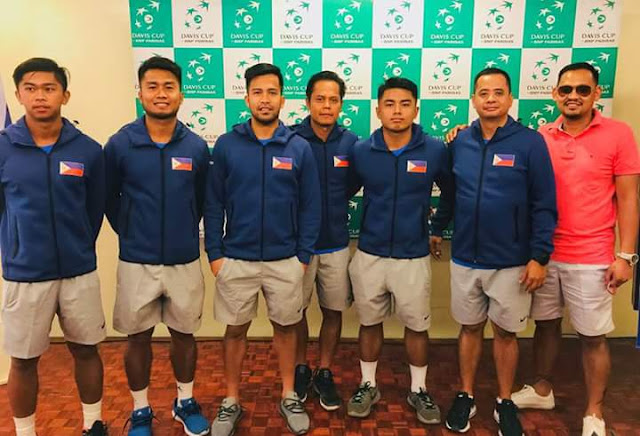 MANILA—Nothing thrills seasoned Davis Cup player and Philippines’ number one Francis Casey Alcantara all the more than to lead the field of Filipino netters that will compete on this weekend’s second round rematch against Thailand, this time at home soil, at the Philippine Columbian Association tennis court.

Alcantara, who spearheaded a juvenile Filipino crew at Jakarta, Indonesia to a 4-1 first round victory last February over the Indonesians, will have to find that leadership composure once more with a much revamped team behind him, as the Philippines seek for a vengeance to recover from a 0-5 beating from Thailand in the same affair last year.

“I’m excited,” said Alcantara. “The crowd and the home court advantage is going to be the key in this tie. They are more experienced than most of our players internationally but we will fight every point,” he added.

Alcantara will team up with the returning Johnny Arcilla for the Sunday’s opener in the double’s rubber, while this year’s UAAP Most Valuable Player AJ Lim, John Bryan Otico, and veteran cupper Jeson Patrombon complete the cast for the Philippines’ mix breed of fresh and experienced players against their Southeast Asian rivals.

“[The preparations are] still the same. We are just doing our routines. We make sure that everybody is in the same page,” the 26-year-old Cagayan de Oro native also told Dugout Philippines through an online interview.

When asked about his thoughts on Arcilla’s return, the 2009 Australian Open junior doubles champion could not hide his delight on the former’s return.

“It's good that he is back on the team. He’s going to help for sure,” he added.

Arcilla’s comeback for the Philippines sheds a huge upside for the national team as he is well-known to be the best player at the tie’s venue to-be, highlighted by his record of eight overall PCA Open titles, not to mention his extreme mastery of the PCA shell-clay courts.

“This is the best composition that we can have,” said the Philippines’ non-playing team captain Chris Cuarto.

“Malaki ang tiwala ako sa kanila, talent-wise o kahit ano pa. On paper, they (the Thais) are better. But anything can happen when you step on the court,” he added.

The Philippines will have to survive the Thailand side of Wishaya Trongcharoenchaikul, Palaphoom Kovapitukted, Jirat Navasirisomboon, and twins Sanchai and Sonchat Ratiwana in order to advance to the Group II final and have a chance of coming back to the Group I of the Asia/Oceania Zone after being relegated in the second division in 2012.

The Philippines leads Thailand in their all-time head-to-head affair, 4-3, but the Thais own the most recent victory in their last match up when they shut down the Filipinos at their own home court in all of the five rubber matches, before falling short against Pakistan in the Group II finale, 2-3.

It is only the second time that both squads will clash in the PCA since the Philippines defeated Thailand in the 1998 first round tie, 4-1, and just their third time facing each other since 2013 when the former likewise pulled off a 4-1 victory over the visiting team at the Plantation Bay Resort and Spa in Lapu-Lapu City, Cebu.

Both teams share a 1-1 win-loss head-to-head record when playing clay court, but the Philippines, certainly, has the edge over the Thais as the latter is admittedly disadvantageous by not playing within their usual hard courts.

“Anything can happen. We played them on hard court in the SEA Games and it wasn't easy. They clay court is not our forte. So I would say there’s a 50-50 chance,” Sonchat Ratiwana said in the tournament’s press launch this week.

Patrombon, meanwhile, will kick off the Philippines’ campaign tomorrow at 10:00 am with the first singles match versus Navasirisomboon while Otico will battle Trongcharoenchaikul in the second singles rubber.

Alcantara and Arcilla will open the second day for the Filipinos in a match against the Ratiwana brothers on Sunday before Patrombon and Otico finish for the Philippines in the third and final singles rubber match against Trongcharoenchaikul and Navasirisomboon, respectively.