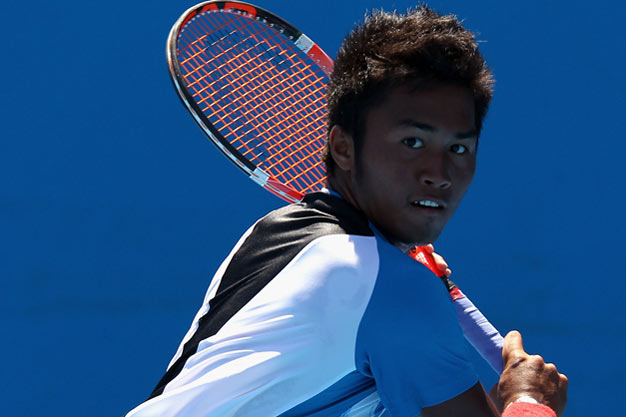 MANILA—Philippines’ long time cupper Jeson Patrombon registered 59 winners, including three service aces, while also breaking four times to pull off a dominating 6-2, 6-2 victory over Thailand’s Jirat Navasirisomboon at the first singles rubber match of the opening day of the second round of the 2018 Davis Cup by BNP Paribas Asia/Oceania Zone Group II, at the Philippine Columbian Association tennis court, Saturday.

Patrombon, who was nominated as the country’s number one player for this tie, never trailed in a one hour and seven minute-rematch against Navasirisomboon, who had him falling when they first squared off last year at the National Tennis Development Center in Nonthaburi, Thailand, 6-2, 6-7(4), 1-6, 1-6.

The 25-year old hotshot from Iligan City looked as dominant as always from all sides of the clay courts of the PCA after maximizing the Thai’s erratic game by sending Navasirisomboon in an unusual situation off 33 measly winners.

Patrombon almost went perfect from service department by firing in all but four services from his first and second serves combined, highlighted by a flawless performance in his second serves, going 19-for-19.

Meanwhile, Navasirisomboon obviously went struggling from the court after yielding all of the three total double faults of the match which he all committed in the first set.

Compatriot Wishaya Trongcharoenchaikul, asserted mastery over a much juvenile John Bryan Otico to give Thailand its first win and even the series at the commencement of the opening day's second singles rubber, 1-1.

Trongcharoenchaikul made quick work of Otico as he tallied a remarkable performance off the service line with 14 service aces compared to the latter’s lone ace en route to a 6-3, 6-4 clinical victory.

The action continues for both teams on Sunday as Filipino tennis icons Francis Casey Alcantara and Johnny Arcilla team up in an attempt to put the Philippines in a one-rubber lead against twins Sanchai and Sonchat Ratiwana before Patrombon and Otico faces Trongcharoenchaikul and Navasirisomboon, respectively, in the reverse singles.