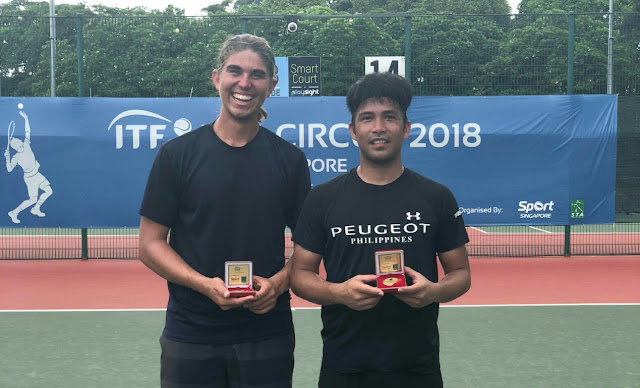 Philippines' top doubles player Francis Casey Alcantara finally pulled off his first ever title this year after he and his new partner Collin Altamirano smashed a dominant 6-1, 6-4 upset win over the top seed Japanese duo of Shintaro Imai and Takuto Niki at the championship match of the ITF Pro Circuit Singapore F2 Futures at the Kallang Tennis Center in Singapore, Friday.

The Filipino-American duo had to bounce back from being down by a game at 2-3 in the second set after relinquishing a 2-0 advantage to seal the deal in 52 minutes and secure the title and a cash prize of US$15,000 in the six-day tournament sanctioned by the International Tennis Federation.

Alcantara and Altamirano shrugged off their underdog status heading into the championship match after showing an early display of dominance as they managed to convert two of their three break points in the opening set.

Alcantara and Altamirano, who are pairing up for the first time this year, claimed their first ever title as a tandem after scoring a total of 51 winners compared to Imai and Niki's 40 winners while also breaking four times in six break point attempts.

"[I am] so happy to get my first win this year. This would help my confidence in my upcoming tournaments," Alcantara said in an exclusive online interview with Dugout Philippines.

The 26-year old hotshot from the Philippines, who paired up with China's Fajing Sun over the last two weeks, bagged his first ever doubles title this season after three successive semifinals in three weeks including two exits in China F5 and F6 in the past two weeks.

This time though, Alcantara beamed that the pressure was nonexistent for him and Altamirano upon facing the number one seeded Japanese pair despite going unseeded after two top seed draws in China early this month.

"Not really. We just wanted to have fun. Seeds didn't matter," he said.

Alcantara and Altamirano booked a ticket to the championship match after scoring three separate suprising wins over seeded duos including Imai and Niki.

The Filipino-American pair dispatched fourth-seed Justin Barki and Thai-Son Kwiatkowski, 6-3, 6-4, in the opening round before smashing their way through two consecutive Australian pairs in the quarterfinals and semifinals.

Alcantara and Altamirano defeated Jeremy Beale and James Frawley in the quarterfinals, 6-4, 6-4, before scoring a massive win over second seeds Maverick Banes and Blake Ellis in three tiebreaker sets, 5-7, 7-5, 10-7 to book a seat at the finals.

Meanwhile, Altamirano also enjoyed his glory in the men's singles after claiming his seconf finals berth in the tournament with a thrilling 5-7, 6-2, 6-3 semifinals victory over another Japanese racketeer Kazuki Nishiwaki.

Altamirano will face Niki on Saturday for the men's singles championship at 11:00 a.m. (Philippine Time) while Alcantara heads back to China and reunite with Sun to compete at the China F7 Futures at Luzhou.