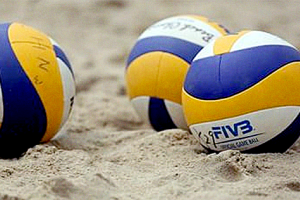 MANILA--The Philippines' top players will leave everything on the sand court against a field of much-taller and experienced competitors as the FIVB Beach Volleyball World Tour main draw blasts off on Friday at the Sands SM By The Bay.

Action will start at 8 a.m. the country's four women and men's teams will vie for ranking points for other FIVB beach volley tourneys.

Sisi Rondina and Dzi Gervacio, will lead the Philippines charge along with the Charo Soriano and Bea Tan, Karen Quilario and Lot Catubag, and wildcard entries DM Demontaño and Jackie Estoquia.

Langkawi Open silver medalists Katja Stam/Julia Wouters of the Netherlands and top-ranked Michelle Amarilla and Erika Bobadilla are tipped to contend in the women’s main draw.

"I may be small, but I can compete toe to toe. I won’t let this opportunity pass me by. I’ll do my very, very best to make Filipinos proud. This is also for me, my family and all those who believe in me,” said Rondina, the most battle-tested among the Philippine team members.

The homecrowd support will be the key to go further in the $10,000 one-star tournament organized by the Beach Volleyball Republic.

"Ilalaban namin ang bandera ng Pilipinas," said Rondina, who was a member of the national team that made it to the quarterfinals in last year's 29th Southeast Asian Beach Volleyball Championships in Singapore.

Everyone was accounted for and the Filipino teams have wrapped up their preparations for the 16-team women’s and men’s main draws. The eight Philippine pairs' first opponents were only known last night after the drawing of lots for women and men is set tomorrow.

The round-of-12 and quarterfinals are scheduled on Saturday, with the semifinals and finals on Sunday.

The event is promoted by E-Plus Global Sdn Bhd and organized by Beach Volleyball Republic Inc.