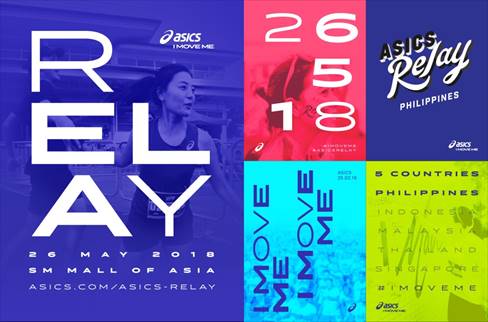 Pasay City - Team Kenya displayed their steep dominance in the full course marathon as they ruled the 2018 ASICS Relay Philippine leg at the SM By the Bay grounds, May 26.

The Kenyans led all the way, from gun fire to the taps as they clocked in a total time of 2 hours, 21 minutes and 55 seconds to rule hundreds of other teams in the men's full course relay.

Distantly following them are Team L TIME STUDIO 4 which clocked in at 2 hours, 29 minutes and 14 seconds, while Team JPDruntri secured third with a 2 hour, 32 minute 46 second tape.

At the distaff full event, Team Ganda R ravaged through opposition and took home the top prize while clocking in at 2 hours 56 minutes and 56 seconds.

“We really enjoyed the race,” said Luisa Raterta, one of the members of the Full Marathon Female category winner team, Ganda R. “We were nervous at first of what is going to come when the race started, but we’re very happy with our experience because it was well organized and it had a good route,” she added.

They were followed distantly by Team BRW and JPD Coaching, who all clocked in a little over the 3 hour tape.

“It was our first time to run in a relay race, so our strategy was to arrange our turns based on our running strengths, and we think our tactic paid off really well” said Kevin Capampangan, member of Full Marathon Mixed category winner Team LTIMESTUDIO 1. “We’re very happy with the teamwork that we’ve built with one another,” said Joida Gagnao one of the members of Team LTIMESTUDIO 1. “It was a good thing for us to establish that kind of camaraderie as it helped us win the race,” she shared.

In the half marathon event, Team BRW, Laguna Gazelles and Philippine Army snagged their places in different clockings. Team BRW checked the 21 kilometer track with a time of 1 hour, 19 minutes and 17 seconds. Laguna Gazelles, meanwhile, crossed the finish line with a 1 hour 37 minute 51 second ticking to take top honors in the women's side. Philippine Army also made their statement as they crossed the course within a little over an hour and 15 minutes.

As part of the grand prize, the three champion teams in the Full Marathon category will receive an all-inclusive flight and accommodation trip to run in the next ASICS Relay race in the country of their choice. In addition to the complimentary race slots, the winning teams received cash and product prizes worth over Php 790,000.

The ASICS Relay not only promises a competitive, team-bonding race, it also offers unique experiences for runners to enjoy. At the scenic seaside race village nestled in SM By The Bay, participants were treated to music entertainment by local musicians and dancers held on a 360 degree LED stage, fireworks, interactive games, and unique photo booths.

After the Philippines leg, the ASICS Relay 2018 will continue the action on August 4th in Indonesia.