ON the first Friday of September, the Philippine national football team are back in action for their first match in more than five months.

And to grace the debut of manager Scott Cooper is a familiar foe of the Middle East, 113th-ranked Bahrain, in which we lost to them in our own patch nearly two years ago in our most recent meeting with them.

Both sides are using this as part of their build-up to the Asian Cup next year, in which the Bahrainis are on Group A that features the host nation, and the visiting Azkals are in Group C which has the Song Heung-min powered South Korea who are still riding high on their successful gold-medal defence in the recently concluded Asian Games.

Bahrain: We already knew them
Our friendly is the fifth in just two years, making it our opponent of choice when the team travels to the Middle East.
In our four matches against them, we already lost thrice to them, including the past two visits here in which we only scored once courtesy of Manny Ott.

Their last fixture was a 4-0 thrashing over Tajikistan that won them Group E of the Asian Cup qualifiers on the same day Phil Younghusband's spot kick sent us to UAE.

What will the gaffer bring to the Azkals?
With predecessor Thomas Dooley initially radicalized the formation by having a 3-4-3 during the World Cup qualifiers, Cooper will retain the three man back line but with a twist.

The gaffer likes playing on a 3-5-2 with an emphasis on attack, which will have a wing play of  Hikaru Minegishi and Patrick Reichelt to supplant Curt Dizon and Jovin Bedic up front, and here's what I've projected for the match. 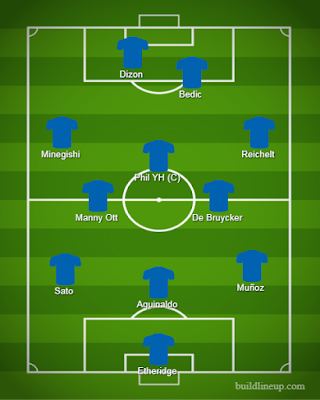 With the squad released last Tuesday, there was a conspicuous absence of Kaya Iloilo's Camelo Tacusalme, who is undoubtedly the most in-form centre-half in the PFL when the Irish manager stuck with Amani Aguinaldo despite missing the remainder of 2017 and the start of 2018 due to a recurring knee problem.

In other words, Cooper much likes to put more emphasis on experience rather than the element of surprise, as John Patrick Strauss and Amin Nazari are not yet cleared to play for the Azkals as of yet.

But what he said last Saturday on the opening day of the Copa gave us assurances that there will be more to come to the fold.

"You'll always listen to the people's advice. I'm working closely with the front office and that's fine with me. I wanted to get to every coach in the league and look as many players as possible."

Come to think of it..
The inactivity of the Azkals since our history-making feat last March is a cause of concern for all the supporters, especially when Terry Butcher held the post for a mere fifty days, but the World Cup veteran never set foot again to the country, citing concerns on how the game has been run in the country.

And with that, Scott Cooper put into action right away, and he has all praises to the former England skipper ahead of his debut in which he aims not just for their Asian Cup debut, but also getting into the final of the AFF Suzuki Cup.

"Terry Butcher's a great player, a great coach and a great human being."

In line with that, he knows that he has a huge task at hand, so the match will be a huge factor in getting them involved in the best way possible.

"They're not gonna know me like they did to Terry Butcher. I'd rather be judged on the performance on the team. I promise that I'm gonna do my best."