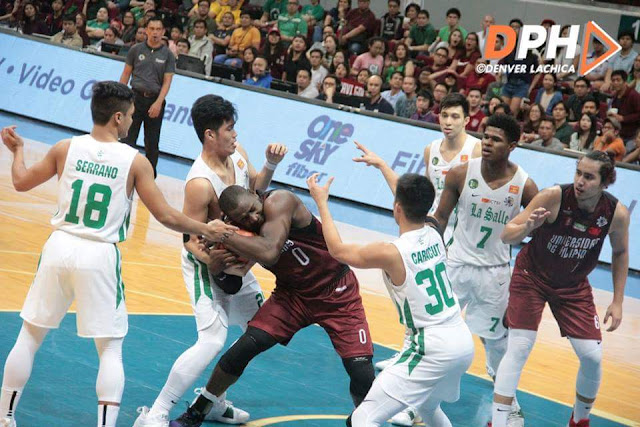 
MANILA -- After a heartbreaking loss from the Adamson Soaring Falcons, the UP Fighting Maroons got their second win for the season as they beat the DLSU Green Archers, 67-61, Sunday at the SM Mall of Asia Arena in Pasay.

Led by Juan Gomez De Liaño, who dropped 17 points, three rebounds, and six assists, and foreign student Bright Akhuetie who contributed 19 points and 19 rebounds, the Maroons managed to secure the victory and go up to a 2-3 record.

The Green Archers had a good start in the first half of the game where they had a four-point lead, 33-29, at end of the half.

But UP’s offense bursted out in the third quarter, and DLSU struggled as they played their first game without team captain Kib Montalbo, who suffered a thumb injury.

The Maroons had their biggest lead at the five-minute mark of the last period at 14 points, 61-47.

But Justine Baltazar and Aljun Melecio didn’t want to end the game too easy for UP as DLSU delivered a 13-0 run and cut their deficit to one point, 61-60, with 2:20 remaining.

Gomez de Liaño, however, managed two clutch baskets to give UP a safe 65-60 lead with 44 seconds left on the clock.

Baltazar and Melecio dropped 55 combined points for the Green Archers, who now have a 2-2 record.