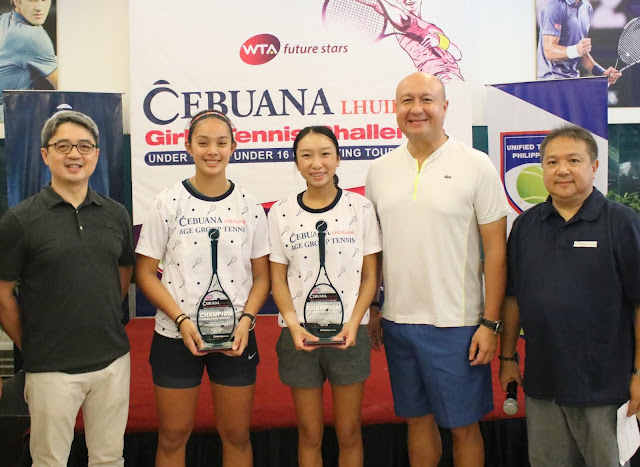 MANILA—Young tennis prospects Macie Carlos and Bliss Bayking are bound to witness the pinnacle of sport for the first time ever as they are set to banner the Philippines in the 2018 WTA Future Stars in Singapore on October 16 to 21.

Carlos and Bayking, the winners of this year's season-ending Junior Race to Singapore Philippine Qualifiers, are set to compete along with the best female U-14 and U-16 female tennis players out of 21 participating countries from the Asia and the Pacific in conjunction of this season's WTA Finals at the Kallang Tennis Centre.

“I am confident that Macie Carlos and Bliss Bayking will perform well in the tournament. I have seen how they play at the Cebuana Lhuillier Girls’ Tennis Challenge and I am convinced that they have what it takes to go head-to-head with some of the world’s elite tennis players,” said Jean Henri Lhuillier, Unified Tennis Philippines (UTP) president.

Carlos and Bayking bested out their compatriots vying for the country's two lone spots at the fifth edition of WTA's program for up and rising tennis stars in the continent after emerging as champions of the U-14 and U-16 events of the two-day Cebuana Lhuillier Girls' Tennis Challenge in Makati last September 22-23.

Carlos, the Philippines' number one U-14 female player, dominated Mica Emana, 6-1, 6-2, en route to winning the title while Bayking, on the other hand, asserted her mastery in two sets over Justine Maneja, 6-4, 6-1.

The two Filipina hotshots will try to win the title in Singapore on top of 46 overall players all competing to earn the opportunity of becoming the best rising female tennis player in Asia and the Pacific.