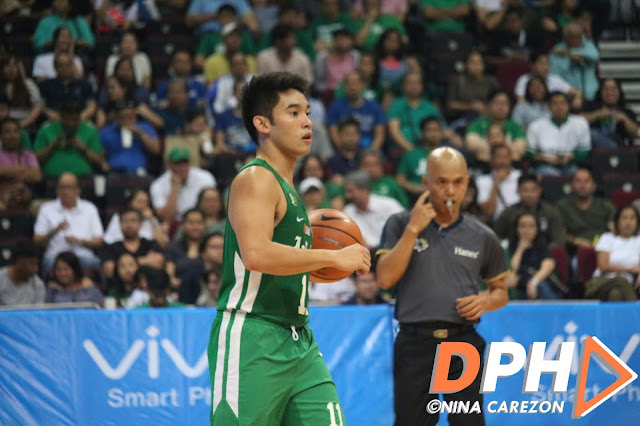 
MANILA--Aljun Melecio was the lone ranger to score in double digits with 21 for the DLSU Green Archers after they faced their arch rival Ateneo Blue Eagles last Saturday at the Mall of Asia Arena.

After Melecio's efforts to win their fourth win this first round of eliminations, it's still not enough to beat the defending champions. He tried to go through the likes of Matt Nieto and Anton Asistio in the perimeter line while also conquering Isaac Go and Angelo Koaume in the paint.

Losing key players like Ben Mbala and Ricci Rivero while also having two teammates injured, it is hard for Season 79 Rookie of the Year to make sure that the DLSU is still a team to beat this season.

Whether there is still need to improve for the Green Archers as the second round of eliminations are coming, Melecio said "As of now di ko pa alam. Siguro pag-uusapan pa namin yan sa training."

Melecio and the rest of the Green Archers will try their best to close the first round of eliminations with a win as they will face the Adamson Soaring Falcons on Saturday, October 13 at the Mall of Asia Arena.