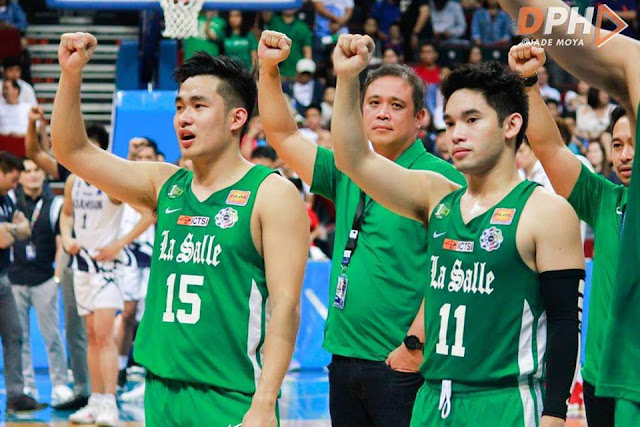 DLSU had a good start at the first quarter as Justine Baltazar and Aljun Melecio lead the Green Archers at the first period with a 6-point lead, 16-22.

DLSU continued their lead as Santi Santillan scored at the 6:34 mark that handed DLSU a 10-point lead in the second quarter.

But the Adamson Soaring Falcons don't want to make this game too easy for the Archers as Sean Manganti made back-to-back baskets to cut the lead nack to six.

Jerrick Ahanmisi took control of the ball cutting the lead to one, 30-31. The game ended at 32-33 with DLSU having the lead.

The Green Archers and Soaring Falcons both have a very powerful third quarter as both teams wanted to get their last win for the first round.

Third quarter ended with a tie, 49-49 as they head to an intense fourth quarter.

Adamson opened the last period with a 7-point lead by CJ Catapusan. Back-to-back buckets for Ahanmisi and Sarr as Adamson holds on to the 62-59 lead over La Salle with 3:14 left.

Adamson and La Salle continues to exchange baskets but ended on an overtime as Aljun Melecio tied the game, 64-64 as they head to overtime.

The Green Archers had a 8-0 run as they open the overtime showing their determination to win the game.

La Salle continues to have the lead but Manganti and Ahanmisi made back-to-back threes at the very last seconds but that is not enough to win the game as DLSU took home it's fourth win (79-78) and ended the first round with a 4-3 record and finishing fourth place.

Jerrick Ahanmisi scored 27 big points for Adamson but failed to end the first round with a win. Adamson now has a 5-2 record sharing the first, second and third place with ADMU and FEU.