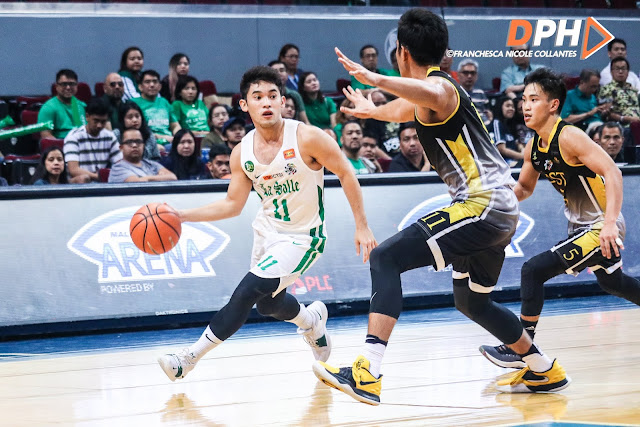 PASAY CITY-- The much awaited match up between Coach Aldin Ayo and Coach Louie Gonzalez resulted in a win for the DLSU Green Archers.

Justine Baltazar and Aljun Melecio led the Archers to a 99-72 win against the Tigers at the Mall of Asia Arena, tallying 22 and 19 points respectively.

Melecio's three-point baskets during the first half greatly helped in the Archers' win.

Jollo Go also contributed 11 points during the said half.

Steve Akomo didn’t suit for the Growling Tigers on Wednesday as he is out due to food poisoning.

Renzo Subido and Zachy Huang led the Tigers with 16 and 13 points respectively.

The Green Archers will try to get a win with their next assignment against their rivals, the Ateneo Blue Eagles on Oct. 6, 4 p.m. at the Mall of Asia Arena while the Growling Tigers will aim for a win against the UE Red Warriors on the same day and venue at 12 p.m.