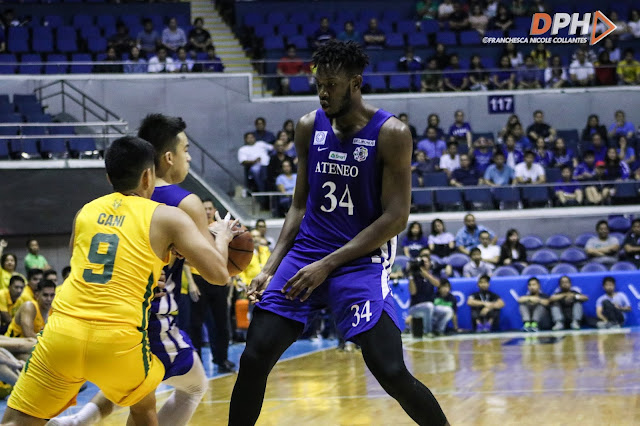 MANILA - Two cagers from women's and men's defending champion squads unleashed their inner core this past week as Ria Nabalan of National University and Angelo Kouame of the Ateneo de Manila University were heralded with the Chooks-to-Go UAAP Press Corps Player of the Week.

This is the first time that the body awarded two players for the weekly honor.
Ria Nabalan, the first-ever female jock to win the award, soothed the Lady Bulldogs to continue making history as she dropped 40 points that led them to their 72nd straight win.
"Sobrang happy that everything was falling for (Nabalan). It’s only a once-in-a-lifetime na makakuha siya ng forty points. Sobrang saya,” Coach Patrick said after witnessing that moment where NU won, 111-64, over the DLSU Lady Archers.
Only two other players have ever reached the 40-point mark in the women’s division of the league.
FEU Lady Tamaraw Raiza Palmera was the first to achieve the feat back in 2011, scoring 44 points in an 85-80 win over the UE Lady Warriors. A year later, fellow Lady Tamaraw Allana Lim did the same, dropping 45 points in another rout of UE, 85-43.
On the same day, Kouame also made his own history.
With the absence of Thirdy Ravena and the Nieto Brothers, Ateneo's big man stood out for the Blue Eagles and imposed a career-high game with 33 points and 27 rebounds - the first of its kind since 2008.

History repeated itself as the Ivorian athlete finished with a 30-20 game to lead Ateneo to an 82-62 victory also against the FEU Tamaraws.
Kouame bested UP Fighting Maroons' sophomore Juan Gomez de Liaño, who after 12 years, notched a triple-double in the men's division.