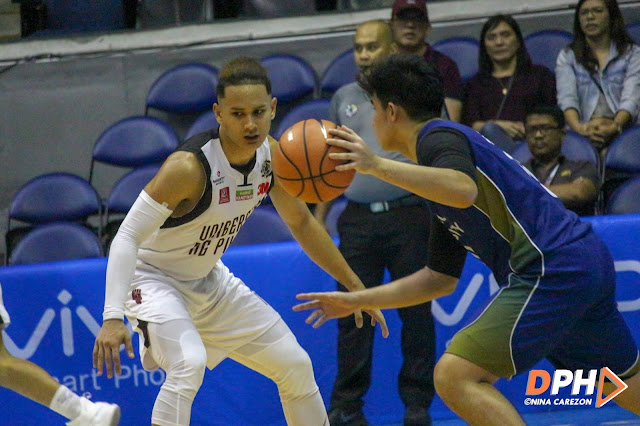 MANILA--The future becomes brighter for UP Fighting Maroons as they continue dominating through NU Bulldogs with the breathtaking win 89-88.

"I just have a bad feeling with how we ended up that quarter. It's a culmination of what happened from the past". Coach Perasol said remembering the instances when the team lead late in the games.

Juan and Javi Gomez de Liano put a show as they lead the Fighting Maroons with 20 and 19 points and with the help of  Bright Akhuetie that contributed 21 points to get their third consecutive win.

It was a great fight that the Bulldogs showed as Dave Ildefonso, JV Gallego and Joshua Sinclair slit their career high with scored 20 and 13 points respectively.

The Bulldogs gave the Maroons a horrifying game as Shaun Ildefonso quickly cut the lead by one point after Jun Manzo to shoot two free throws on the last seconds of fourth quarter.

Gallego run the length of the floor but instead of shooting it, he passed it and allowing the UP Fighting Maroons to get the win.

NU Bulldogs stumble for 5th consecutive loss and looking forward to end the first round elimination with a win against UE Red Warriors this coming Saturday at MOA Arena while the UP Fighting Maroons seek another victory facing the inspirit UST Growling Tigers on Wednesday.