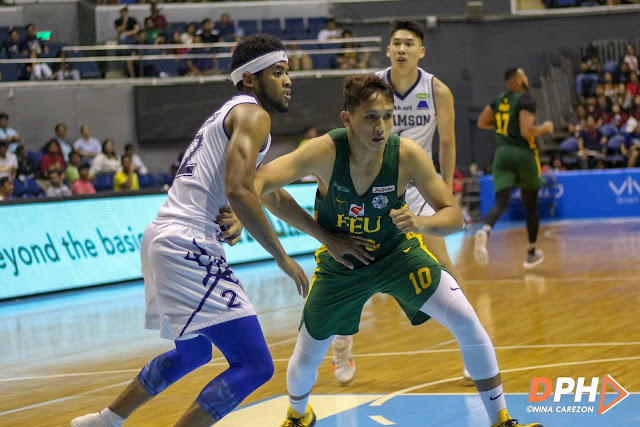 QUEZON CITY-- The undefeated Adamson Soaring Falcons didn't finish the season with a unscratch record after FEU Tamaraws let them taste their first loss with 85-88 blowout.

The game heated up on the midway of the second half when Arvin Tolentino fouled out after showing unsportsmanlike foul against Sean Manganti.

Falcons cut the lead into one with Jerom Lastimosa's steal and a layup but Prince Orizu reclaim the lead after shooting free throws 80-78 on the scoreboard.

The hope for the Falcons came alive after Simon Camacho shoots the ball and send the game to its first overtime this UAAP season.

In the extra period, both teams exchanged leads until the 20-seconds mark when FEU won the loose ball sprawl leading to an open Barkley Ebona lay-up.

Even Arvin Tolentino was ejected, he still managed to lead the Tamaraws with 19 points, four rebounds, and two assists while Hubert Cani and Wendell Comboy connection helped the team to overcome the grind.

Jerrick Ahamnisi and Sean Manganti still did their best to remain unblemished after scoring 21 and 20 points respectively.

Soaring Falcons will try to regain their lost glory against Green Archers while Tamaraws will try to continue their winning streak on Wednesday facing the defending champions Blue Eagles.