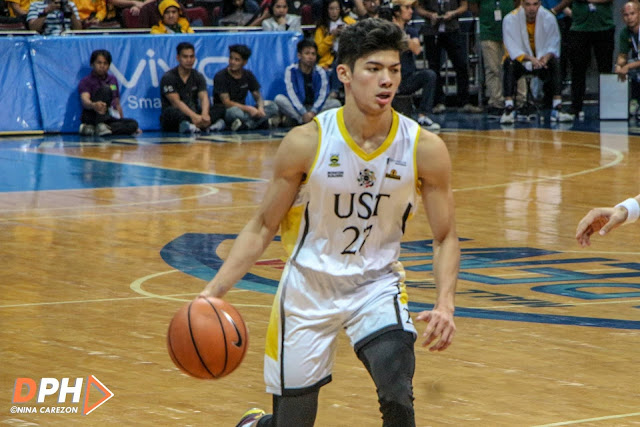 "We have Cj Cansino".
First-year UST head coach Aldin Ayo always answers that whenever he was asked about his recruits during the off-season.
And Cj Cansino didn't fail to prove not only to coach Ayo but also to the UST Community as well after proving his self that his coach was right for having that much faith in him.
The Tiger's swingman average in the span of four days 11 points, 11 rebounds, 4.5 assists and 1.5 steals on their back to back win that en route to his first ever Chooks-to-Go Collegiate Sports Press Corps UAAP Player of the week.
"Gusto ko lang ibigay best ko for UST kaya kahit pa nung Juniors hanggang ngayon, pag pumapasok ako sa loob ng court, binibigay ko talaga best ko."
Cansino has played right on his rookie year as he is one of the contenders for Rookie of the Year, and even more, for MVP also.
He bested another breakout Growling Tiger in Zachy Huang as well as the Ateneo duo of Thirdy Ravena and Ange Kouame, La Salle main man Aljun Melecio, and John Lloyd Clemente, another of NU’s promising first-year players, for the weekly award given by print and online scribe covering the beat.