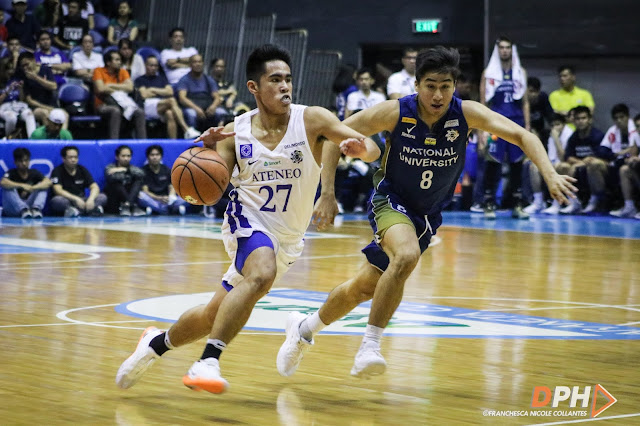 QUEZON CITY – Blue Eagles rookie SJ Belangel is the next guy from the team to employ the “next man up” mentality after fellow point guard Tyler Tio and achieves his career high in their game against NU Bulldogs.

Following the absence of one of the team’s main guys on the court, Matt Nieto, the Blue Eagles’ point guards had been compelled to step up in order to suffice for his role on the court. Tyler Tio was the first to take charge, shining in Ateneo’s games against the UP Fighting Maroons and UE Red Warriors and attaining his career high for both times.

Now, the Ateneo Blue Eagles had witnessed yet another career high from one more of their point guards in rookie SJ Belangel. Belangel has finally gotten his turn to prove his grit on the court in the Blue Eagles’ game against the NU Bulldogs, successfully making his presence known by producing a total of 11 points and ranking third next to Thirdy Ravena and Ange Kouame as the team's top scorers for the game.

“Kuya Ty needs a back-up, so I produced and grinab ko yung opportunity. Luckily, I had a chance to have a career high,” Belangel said, sharing what urged him to step up too during the game which served as Ateneo's clinching claim to a Final Four spot this season.

Coming fresh from high school-level basketball as a member of the Blue Eaglets, the demands that collegiate basketball calls for might have stunned Belangel at first. “Yung level of physicality, iba yung sa high school at sa college,” he admitted.

However, this never held Belangel back from giving and bringing all that he can offer to the table. In fact, he even gave the Blue Eagles a buzzer-beater, up-and-under layup as the third quarter came to a close, effectively exiting with a 65-47 score despite the Bulldogs' John Lloyd Clemente's solid shots.

“You just have to be ready palagi. Yun lang naman ang nasa isip ko,” he added – and we’re glad that his readiness has finally paid off. Now, there’s one question left after his standout game: is the world ready for SJ Belangel?