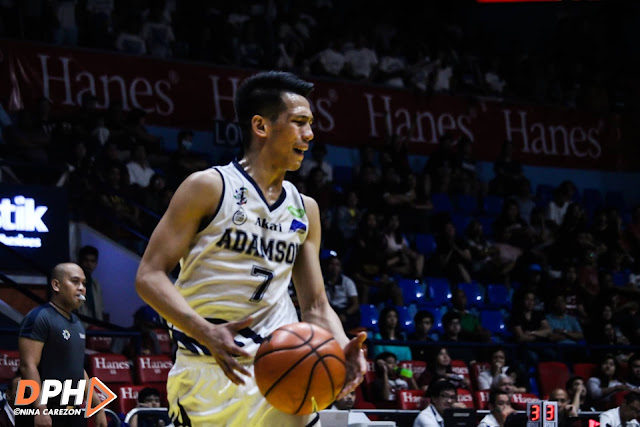 SAN JUAN, MM -- The Adamson Soaring Falcons broke the UP Fighting Maroons' heart for the second time this season after beating them, 80-72, on Sunday at the FilOil Flying V Centre.

Adamson is now in solo second place with an 8-2 record in the standings, while UP, despite a huge fourth quarter run that made things interesting, went down to 5-6, tied with the FEU Tamaraws for joint fifth.

The Fighting Maroons went on a great run in the final frame by cutting the lead down to four, but Sean Manganti who knocked down the game-winner in their first meeting, threw a cold-blooded triple that served as a dagger.

Jerrick Ahanmisi led the Soaring Falcons with 27 points and 6 rebounds while rookie Jerom Lastimosa rendered 14 points, a career-high, with 4 rebounds, 3 steals, and 2 blocks.

The Soaring Falcons will face their fellow league leader Ateneo Blue Eagles on Sunday, November 4, 4 p.m., at the Ynares Center in Antipolo, while UP Fighting Maroons will try to gain victory and keep their final four hope on Saturday, November 3, 4 p.m., at the same venue.