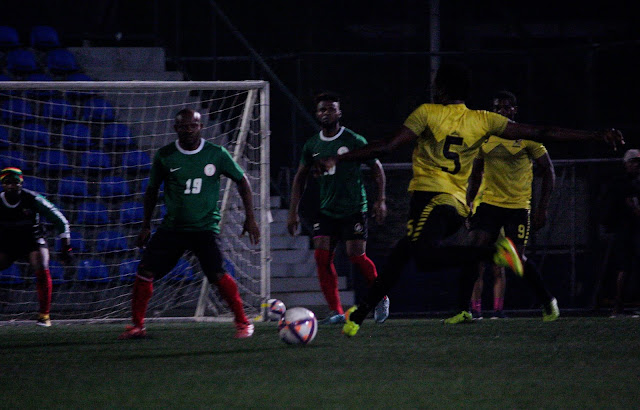 TAGUIG -- It will be a West African Clasico to end the 7's Football League season as Super Eagles and Ghana FC booked their spots in next week's final after dispatchng their respective rivals in the semifinal Monday evening at the McKinley Hill Stadium.

The fourth-seed Nigerian squad caused the biggest upset in the tournament, knocking down top-seed Laro, who were beefed up by current players from Global Cebu in the PFL, 4-1.

Ugochuku Ebere found the net in each of the halves to record a brace, as he opened the scoring six minutes into the match, which was then cancelled out by Charlie Beaton four minutes later.

However, that was they can muster as Super Eagles controlled the match the rest of the way, with Olissa Analle giving them the go-ahead goal in the 16th minute.

The Nigerians took the match away late from Laro, as they fired two quick goals in a four-minute stretch with Ebere bagging a brace in the 43rd minute and Michael Okeagu firing the final strike three minutes before full time.

Joseph Dabo got the Amigos started with a 10th minute header to put them in front, but the Black Stars had pulled level through Adams for a 1-1 scoreline at the break.

Ghana got the go-ahead two minutes after the restart when David Asare hits from outside the box after Adams lost the ball.

Asare then turned provider in the 35th minute when he picked out Adams and the number 9 did not disappoint in converting the marginal strike.

Godwin Odugu got the consolation from a free kick deep into added time for the final count.