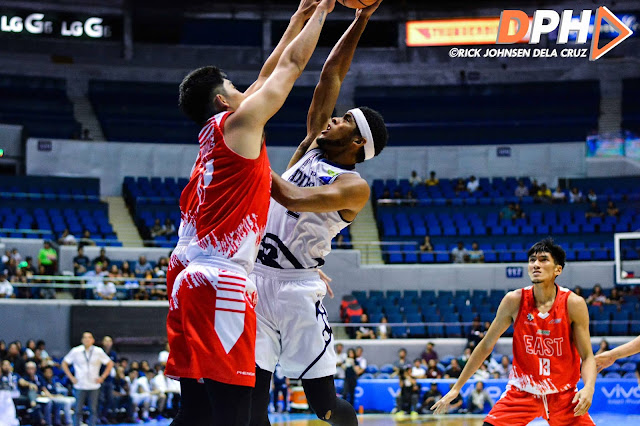 By Yann MagcamitQUEZON CITY - The Adamson Soaring Falcons successfully overtook the UE Red Warriors with a score of 85-72 after the latter pulled up a strong start.After putting in a lead as big as 17 points thanks to the sure-shooting duo of Alvin Pasaol and Philip Manalang, the UE Red Warriors took full control of the court on the earlier half of their game against the Adamson Soaring Falcons. However, the Falcons were not just any team to let others dominate them - not especially after they had secured the second spot in this season's Final Four.The game became neck-to-neck as halftime approached, with the score tying up at 40-40 as the Falcons caught up to the Warriors' pace before the first half came to a close.
Falcons Jerrick Ahanmisi, Sean Manganti, and Jerom Lastimosa successfully pulled through for the Falcons, all putting on double-digit individual points to contribute to the overall team score, which closed at 85 for the Falcons. Papi Sarr also put in an impressive total of 24 rebounds, providing a strong point for their team's win against the shooting machines of the UE Red Warriors.

Adamson Soaring Falcons will try to get their twice to beat advantage for the Final Four with a win against their final game vs. FEU, on Sunday, Nov.18, 4 p.m., at the Mall of Asia Arena and if the DLSU Green Archers will lose their game against the Ateneo Blue Eagles tomorrow, 4 p.m., at the Smart Araneta Coliseum.