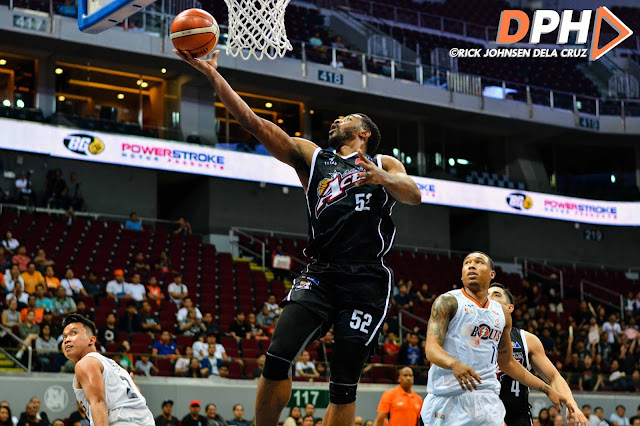 MANILA -- Simon Enciso and Mike Harris combined for 60 points to lead the Alaska Aces' 100-95 Game 2 victory over the dazzling Meralco Bolts in their best-of-five semis series in the PBA Governor's Cup at the Mall of Asia Arena in Pasay.

Harris got 37 points laced with 19 rebounds and three assists, while Enciso got 23 points and a pair of rebounds and assists.

Nico Salva was among the catalyst as he forced the first deadlock of the game at 23-all but Chris Exciminiano shot a cold-blooded corner triple over KG Canaleta and gave back the lead for Alaska, 26-23.

Both teams had a feast from the 3-point line, but Alaska's transition offense and defense made the Bolts frustrated and they came up on top at the half, 47-40.

Back-to-back baskets for Enciso and Nonoy Baclao opened up the scoring in the third quarter and gave Alaska a dozen-point lead, 52-40. The lead even ballooned to 17 with 6:46 remaining in the third.

Meralco, however, pulled off a huge fourth quarter run that drew the team to within just one, 95-96, with 14 seconds remaining.

But the team took some time before fouling Jvee Casio in the next play. Casio went 2-for-2 from the line to stretch the lead to three with seven seconds remaining.

Amer had a chance to force overtime, but he missed his three-pointer and Simon Enciso sealed the win with two more charities.

Game 3 of the Alaska-Meralco semis series will be on Thursday, 7 p.m., at the Cuneta Astrodome also in Pasay.