QUEZON CITY - Ateneo continues its winning ways against arch-nemesis La Salle, churning out a 71-62 win in the main game of Sunday's UAAP Season 81 seniors' action at the Smart Araneta Coliseum.

Already assured of a Final Four spot, the Blue Eagles were simply too much for its Taft rivals for an 11-2 record and solo leadership in the standings with a game remaining vs. UST, on Wednesday.

After a low scoring first quarter which the Archers almost dominated and technical fouls handed in one go before it finished due to an altercation between Aljun Melecio and Isaac Go, the Eagles were able to tie the game with 8.3 seconds left before the first half came to a close with a shot from Matt Nieto. 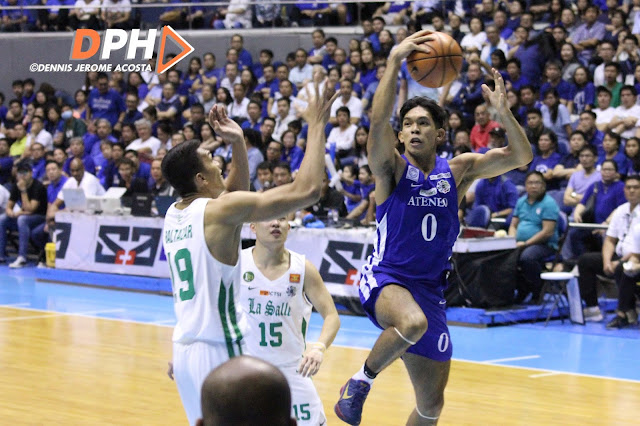 Thirdy Ravena and Angelo Kouame cashed out double-double performances for the Katipunan-based ballclub. Ravena finished with 14 points and 10 rebounds, while the Ivorian Kouame issued 11 and 10 boards.

The Eagles banked on their offensive rebounds which opened so many second chance points for the team. Keeping up the "next man up" mentality that started showing through Tyler Tio in the past games, Will Navarro also made his own stepping up by playing center instead of forward, giving the team a "sweep" of rivalry games against the Archers so far for the season.

Melecio paced La Salle, dropping at 8-5, with 13 points, seven rebounds, and three assists on a measly 3-of-9 shooting from the free throw line. Justine Baltazar and Santi Santillan were the other double-figure producers with 12 and 11, respectively.