Bates talks about the mindset he keeps as a Green Archer

Bates talks about the mindset he keeps as a Green Archer 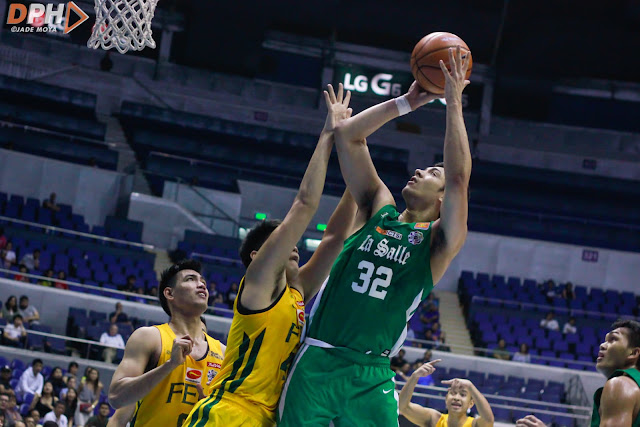 QUEZON CITY – Brandon Bates made the necessary step-up for the Green Archers as they faced the FEU Tamaraws last Saturday, and his efforts were compensated with a well-deserved career high.

Bates was fired up on the court as the DLSU Green Archers went up against the FEU Tamaraws, and this definitely showed on the stat sheet as he garnered a total of 7 points, 10 rebounds, 2 blocks, and 1 assist for himself.

With this, he has earned his career-high and gave the Green Archers blazing hope as they continue to vie for a spot in the Final Four.

“I’m not too confident myself,” he confessed. “It’s nice to know that the coaching staff, the players, they have confidence in me to step up and do what I need to be – [which doesn’t have to be about being] the primary scorer but to really help in other ways,” he added.

Despite this, Bates didn’t mention any kind of pressure getting into his head for every game.

“I just go in every day with the same mindset,” Bates, who serves as one of DLSU’s big men and whose presence under the basket for rebound is very important, noted, and his positivity proves to be just as consistent as his mindset.

“This game’s difference is I had a little bit of coffee before the game so [there’s] a bit more energy,” he even joked.

Turning serious though, Bates shared what he had kept in mind as he goes on the court with the rest of his team. “But really, it’s what I’ve read about professional players. They’re not always gonna be starting lineup, but they’re always ready to play when their coaches ask them so that’s really it,” he said.

The Green Archers’ coach, Louie Gonzalez, was one of the main men to recognize Bates’ efforts and determination in every game.

“Before the game, I spoke to him that with the effort he’s giving, he has to commend himself,” the DLSU coach shared. “I told him, ‘Brandon, every time you get that offensive rebound and you see the ring, you have to finish it. I want you to commend yourself’ kasi this guy will do everything – not just on scoring but he will do everything to help this team.”

With this new feat for his career, we do agree that Brandon Bates must give himself a pat on the back, plus a mental note to keep up the good work until the Green Archers claim their own spot in the Final Four.