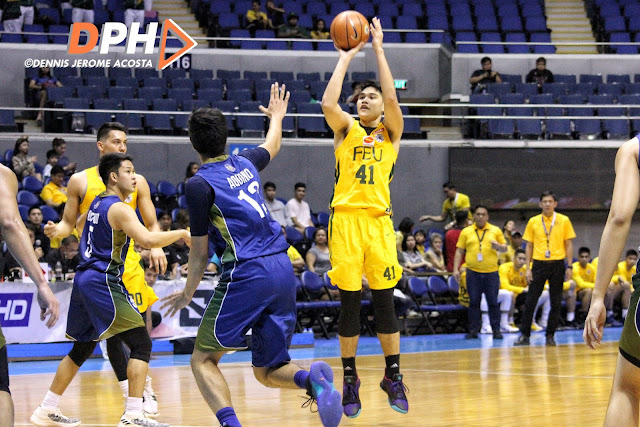 QUEZON CITY - The FEU Tamaraws hold on to their hope of landing a spot in the Final Four with win over NU Bulldogs.

The Tamaraws, though unable to hold back John Lloyd Clemente's production of 38 points in total with his monstrous shooting, dragged down the Bulldogs to another loss. The Tolentino-led Tamaraws produced their biggest lead on the first quarter, going ahead of the Bulldogs by as much as 16 points.

However, the two teams produced a tight last quarter, going neck-to-neck against each other as the Bulldogs persisted in closing the gap made by the Tamaraws. They almost had the same points produced both inside and outside the perimeter (24-24, 46-42) and second-chance points to bank on (15-10), but the Tamaraws showed no signs of letting the Bulldogs take such a crucial win, especially brought by their bench which made a total of 31 points.

With this win, the Tamaraws remain eligible to vie for one of the last two remaining spots in the Final Four, given that they beat the Adamson Soaring Falcons on their next game. This will give them a chance to face the UP Fighting Maroons in playoffs if the Maroons lose to the DLSU Green Archers on their game next Wednesday.