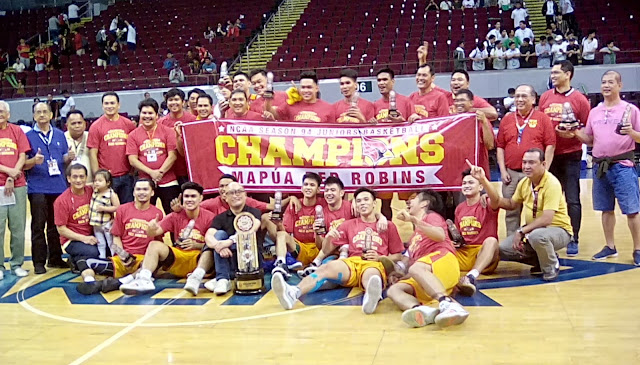 PASAY CITY -- Mapua regained their NCAA Juniors basketball title after edging out CSB-La Salle Greenhills, 77-74, in the third and final game of their title series Thursday afternoon at the Mall of Asia Arena.

The Red Robins of Randy Alcantara were willed by the dynamic duo of Paolo Hernandez and Dan Arches to level San Beda's record of 22 titles in high school basketball, dethroning the Greenies despite only having six points in the pay-off period.

Hernandez capped off his Finals MVP award with a double-double of 33 points and 12 rebounds on a 7-of-13 shooting from beyond the arc with Arches scoring all the fourth quarter points to finish with 22.

Season MVP Joel Cagulangan was hobbled by an injury four minutes into the game and finished his Greenies career with 10 points, with Inand Fornilos leading LSGH with 18 in a losing effort to retain the title they won last year.

Mapua built their biggest lead at 17 before settling with the 71-56 advantage before the Greenies rallied thru Fornilos and Joshua David who had all but two of his 13 points coming in the second half.

However, the rally which culminated in a wild final two minutes of the basketball season was ended when David had his potential tying triple at the buzzer waved off by the officials.