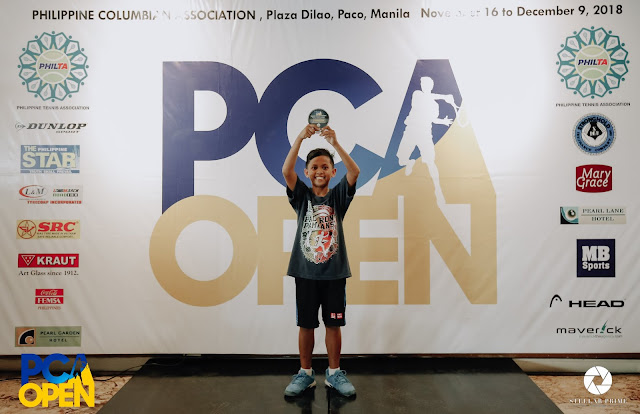 Nuguit squandered a one-set advantage but managed to pull off a 6-1, 4-6, 6-3 victory over Gerald Gimeda of Ormoc City in a two-hour epic, while national juniors tennis team member Emana of Manila, on the other hand, proved to be too much to her national teammate Angeline Alcala of Lucena City, 6-4. 6-2.

Last year’s 10-Under Unisex champion, Nuguit, captured his second straight title at the PCA Open after formalizing his return to the final round after dominating Joshua Diva, 6-3, 6-0 in the semifinals before weathering the potential comeback of Gemida who flashed signs of his upset potential especially in the semifinals where he stunned top seed JR Costa in two straight sets, 6-4, 6-2.

The unseeded Gemida scared Nuguit in the second frame after getting up by as much as three game points before the latter rallied from 1-4 down to the tie the match at 4-4, only to fall two straight games again to the former to prolong his agony of hoisting his first U-12 singles title, thanks to his consistency and heavy ground strokes.

Meanwhile, Emana secured her own trophy after breezing past through all the tournament’s top three seeds including the second seeded Alcala.

Furthermore, in other events, top seed Kean Sebastian Enriquez stormed back from a set down to complete a 2-4, 4-1, 4-2 come-from-behind victory over second seed Kriz Roque Lim to clinch the 10-Under Unisex singles title and add another hardware to his title case this year after winning the 10-Under title at the Globe Citigreen Junior Tennis Cup last month.

Enriquez concentrated on the 12-Under Boys category but opted to join the 10-Under in Cebu and PCA to strengthen his case for a title match after getting sick last year at the opening day of the PCA Open.

Lim later extracted revenge though, after he and his elder brother Prince won five straight games and survived a three-point deficit to outlast Enriquez and Gavin Kraut, 8-6, for the 10-Under doubles title.

The PCA Open Age Group events will resume on November 23 to November 26 for the 14-Under, 16-Under, and 18-Under events while the main draw for the Men’s and Ladies’ Singles Open will start on November 29 at the same venue.