UP stays alive after sending UST out of contention

UP stays alive after sending UST out of contention 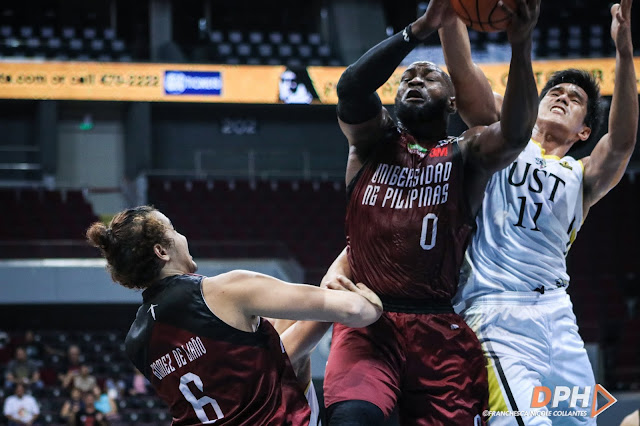 QUEZON CITY -- The Final Four hope for the UP Fighting Maroons is still alive after they beat the UST Growling Tigers, 83-69 today at the Smart Araneta Coliseum.

With the win, UP is now in solo fourth with a 7-6 record.

The Maroons' breakaway began with a scary moment for UST as CJ Cansino fell down to the floor in pain with 5:57 left in the second quarter.

After what happened to Cansino, the Growling Tigers began to struggle from there as they have been eliminated from the Final Four contention.

Growling Tigers Marvin Lee and Renzo Subido still did their best and contributed 26 and 22 points respectively.

The Fighting Maroons will try to improve their standing as they will play their final game for the elimination round against the DLSU Green Archers on Wednesday, November 14, 4 p.m., at the Mall of Asia Arena, while the Growling Tigers will face the powerhouse Ateneo Blue Eagles on the same day and venue at 2 p.m., for their last game in the elimination round.