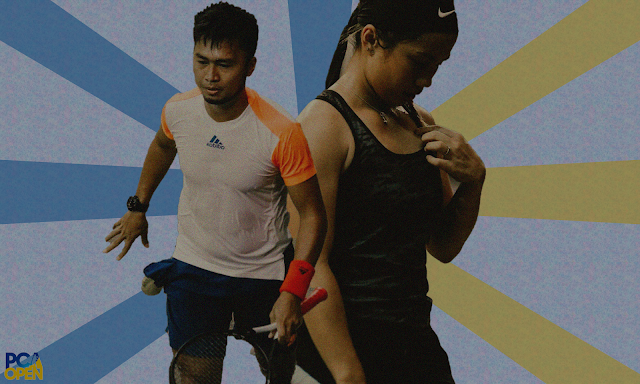 MANILA—Jeson Patrombon and Marian Jade Capadocia ground out their own gritty championship matches to win the men's and women's singles titles of the 2018 PCA Open, respectively, at the PCA Courts, at Plaza Dilao in Paco, on Sunday.

Patrombon was drawn at the blockbuster bottom half of the draw and inside eight-time PCA Open singles champion Johnny Arcilla's quarter but managed to sneak into an uncharacteristic semifinals against Niño Alcantara to eventually claim his maiden PCA Open championship.

On the other hand, Capadocia managed to successfully defend her PCA Open title after easily dismantling Shaira Rivera in two straight sets, 6-4, 6-3.

The Arellano University star, who admittedly contemplated about not joining the 2018 PCA Open due to the new NCAA eligibility rules, did not drop any single set over the course of the whole tournament en route to a record-setting six PCA Open titles.

Meanwhile, a tale of two surprising runs highlighted the doubles championships as top-seed Alcantara and Nio Tria lifted the men's doubles title while fourth-seed Bambie Zoleta and Aileen Rogan hoisted the trophy over at the women's side.

Alcantara and Tria stunned the three-peat-seeking duo of Arcilla and Ronard Joven, 7-6(4), 5-7, 10-8, before Zoleta and Rogan had their own upset victory over top-seed sisters Cristine and Clarice Patrimonio, 2-6, 6-4, 10-8.

The 2018 PCA Open is the 37th edition of the annual tournament hosted and organized by the Philippine Tennis Association which kicked off last November 16 and featured some of the country's top tennis players.