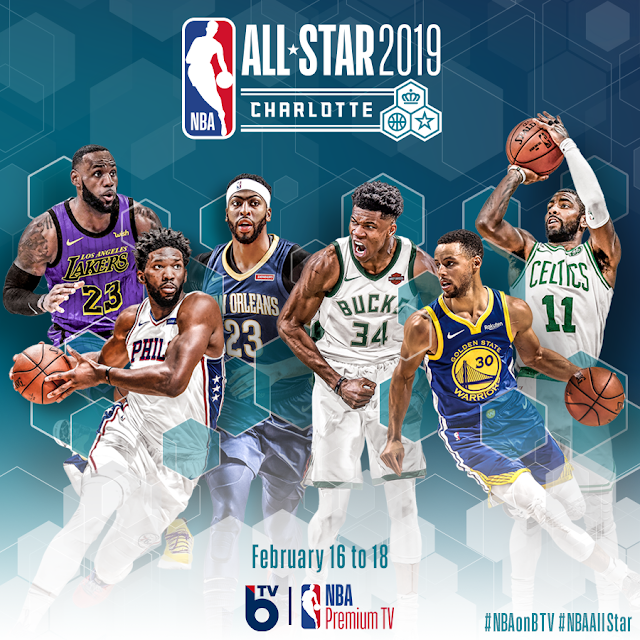 MANILA--It’s that time of the year where 24 of the brightest NBA stars converge in one arena and put on a show for fans all over the world.

The mid-season classic of the NBA, the 2019 All Star Weekend, will be held in Charlotte this Feb. 16-18 (Manila Time), and Solar Entertainment – Basketball TV and NBA Premium TV – guarantees that you never miss the action.

The first event will be the Mountain Dew Rising Stars where top NBA rookies & sophomores are divided into Team USA & Team World take the centerstage on Feb. 16 live at 10 a.m.

The second day of the weekend, the State Farm All Star Saturday Night will highlight the highly skilled players of the NBA thru different side activities like the Skills Challenge, 3-Point shootout and the most awaited event – the Dunk Contest.

Then it's Team Lebron versus Team Giannis.

The 2019 NBA All Star Game pits 24 of the best performing players of the first half of the season.

The team rosters will be unpredictable for the second straight year as the two captains once again drafted the players who will be their teammates during the All Star Game.

For those who want to experience the 2019 NBA All Star Weekend Live, fans can troop down to the “BTV All Star Festival 2019” on February 17 at Eastwood Central Plaza.

Fans will be treated to a day of live NBA events plus different basketball activities that will bring the All-Star experience closer to you!

Admission to the event is free and you also get a chance to win exclusive merchandise from NBA partners.