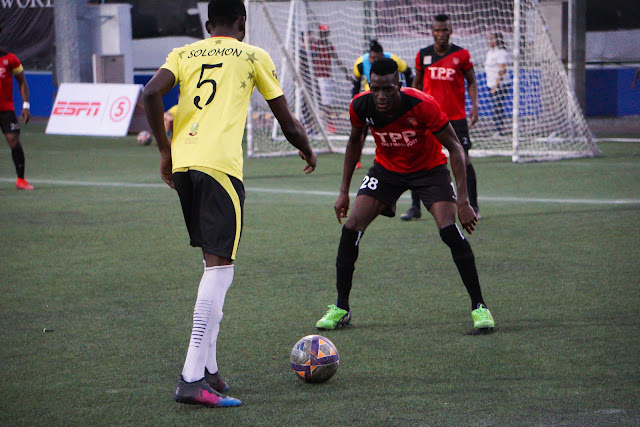 After struggling to get the precious three points in the team standings for five straight weeks, Ceres-Negros Youth F.C. finally achieved a breakthrough win at the expense of Stallion Laguna, while Bohemian Sporting Club, H&J All Stars and Tondo F.C. all bounced back from previous losses with close victories.

Season 2 finalists Super Eagles and Ghana F.C. remain neck-and-neck at the top of the standings after successful outings yet again.

The two undefeated teams have been rivals from the beginning of the league, and the race to determine who the better team continues halfway in the elimination round.

“Like what I have said before, we know how to play, but as it stands now, we do have a lot of injured players on our list and with the way we played the games today, I know there are still a lot of work to do, we still have a lot of things to improve but I’m still going to assure that we will remain undefeated. We are the defending champions and we will still be the champions,” said Super Eagles head coach Danny Kross.

“We are not under pressure at all. We are not even thinking about Super Eagles, we are thinking about us. We don’t have competition; we are competing with ourselves. We make sure that every game, we play to our best knowledge. We have had lapses (last time) so we really prepared for this game, talked to every player that we have to step up. We controlled the game from the start, until the end, we didn’t underestimate our opponent” said Ghana F.C. head coach Ayi Bimbo.

“We dominated most of the possession. Most of the game was played in Matu’s half. We just had to continue, take some more shots, try to open them up because they had all their seven players in their own half. Our wingers played wise, created more space and then just continue with our game plan,” said B.S.C. head coach Mikee Carrion.

The H&J All Stars recorded a hard-earned win over Superbad, 2-1, while Tondo F.C. relied on their rock-solid defense to escaped Futbol Funatics, 2-1.

Tondo opened the match scoring the first two goals and was close to tallying a shut-out as they deflected many of their opponents’ attempts in the second half.

A last-minute conversion from a bicycle kick by Abel Gboko prevented a clean sheet, but it wasn’t enough for Futbol Funatics.

“We talked about it in the huddle that this game is going to be a tough game. It is about toughness and durability so I shared to them a mantra that I also use during the game which is COCARECO, it means cool, calm, relaxed, and composed. I want them to play that constantly in their heads so that they can stay in focus,” said Tondo F.C.’s Peter Amores.

Ceres-Negros Youth F.C. ended their Season 3 drought with a 4-2 win over Stallions Laguna.

The match was tied 2-2 at the half before the eventual winners put on a show in the second half for their maiden win in the tournament.

“In training, we were told to work harder as a team. Being in a tournament such as this one, which is organized by some Azkals players, it motivates us to become better players, to become better for the upcoming leagues, it gives us the possibilities to join the big clubs such as Ceres and Kaya. Even if you lose some, you win some – it’s all part of the game, at the end it’s just a question of whether you give up or stand back up,” said Ceres Youth F.C. player Gael Papillon.

The 7s Youth League also kicked off with a brand new tournament featuring U9 and U13 teams, with eight playing in each age bracket.