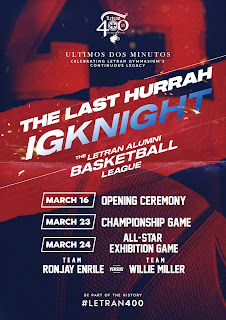 MANILA—In line with the celebration of its founding anniversary, Colegio de San Juan de Letran is calling back its former athletes and basketball frenzy alumni to be part of the IgKnight Alumni Basketball League.

The said league will be the first of the many activities lined up that will be held at the Blessed Antonio Varona Gymnasium prior to its scheduled demolition on April 7.

A total of 13 teams will play for the said league.

An all-star game which features former Letran Knights headed by Willie Miller and Ronjay Enrile are going up against each other follows on for the delight of the fans after the championship game that is slated on March 23.

The gates of the Letran Gym will be open to the public for those who wants to watch IgKnight: Alumni Basketball League with entrance fee of P100.