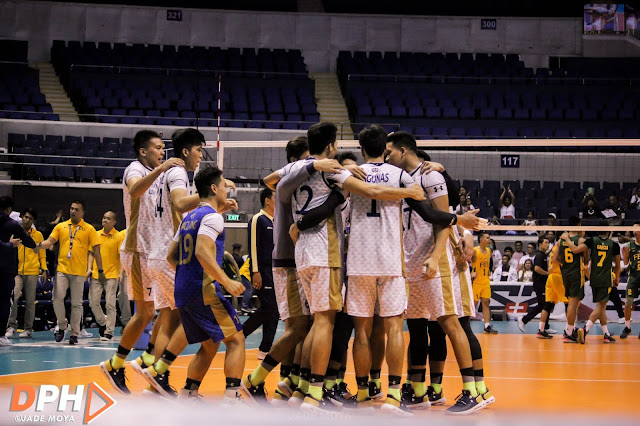 by Adrian Murilla
QUEZON CITY - The defending champions National University Bulldogs draws first blood in their best-of-three final series against Far Eastern University Tamaraws, 21-25, 25-23, 25-23, 24-18, Saturday afternoon, at the Smart Araneta Coliseum.
NU is eyeing for its 4th championship title and its 2nd back-to-back after Season 75 & 76. While on other hand, FEU is trying to reclaim its glory after their Season 74 championship.
The Tamaraws led in most of the sets but the Bulldogs shows supremacy in the 3rd and 4th set wherein unforced errors haunt the hungry FEU squad.
4 Bulldogs march into double digits led by the MVP Bryan Bagunas with 18 points- 16 attacks, a block and an ace followed by this years Best Opposite Spiker James Natividad's 16 points (15 attacks and an ace). Kim Malabunga and Madzlan Gampong both added 10 markers to power the Bulldogs past Tamaraws after losing the first set and sweeping the succeeding sets.
On the other hand, Captain Richard Solis and JP Bugaoan led the Tamaraws by chipping in 17 & 14 points respectively.
Game 2 of the Finals will be on Wednesday, May 15 at the Mall of Asia Arena in Pasay.
The Scores:
NU (3)- Bagunas 18, Natividad 16, Gampong 10, Malabunga 10, Saura 7, Almendras 2, Retamar 1, Ancheta 0, Marcos (L)
FEU (1)- Solis 17, Bugaoan 14, Garcia 9, Paler 7, Quiel 6, Suarez 2, Calado 1, Silang 1, Padon 0, Barrica (L), Lorezo (L)