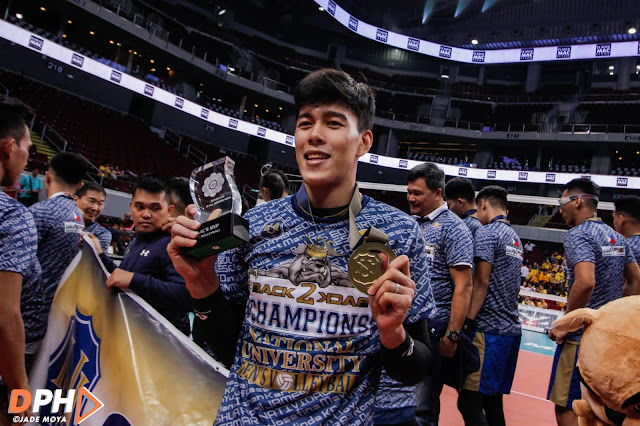 PASAY CITY - The National University Bulldogs swept the Far Eastern University Tamaraws in their Best-of-3 final series, 24-26, 25-23, 25-23, 25-19, Wednesday afternoon at the Mall of Asia Arena.
Bulldogs bagged its 4th championship and 2nd back-to-back crowns from Season 75 & 76 and Season 80 & 81.
Season MVP Bryan Bagunas also got his 2nd Finals MVP after tallying 53 points, 22 excellent receptions and 12 excellent digs in two games.
Each sets was a toe-to-toe match up for the two teams. FEU's 3 kill blocks over NU's outside hitters in the end of 1st set gave them a 1-0 set lead against NU.
Momentum has been carried by the Tamaraws in the second set but the Bulldogs slowly cutting their deficit and finally tied the game at 18. A costly illegal backrow attack by Jude Garcia tied the game at 1-set all.
Rookie of the Year Angelo Almendras takes over Set 3 for the Bulldogs as he single-handedly block skipper Richard Solis to gave them the lead, 16-12. A timely service ace by Jann Ancheta gave them the boost to escape FEU's threat in Set 3, 25-23.
Tamaraws, who had starting setter Owen Suarez went down to an injury during the tail-end of the third set, continued to stay within range of NU in the fourth set. However, graduating players Malabunga and Bagunas went on fire in the last set to reassure that the Bulldogs will never look back. Bagunas chipped in the last 3 points for the Bulldogs to end his UAAP career with a bang at 25-19.
Aside from Bagunas, NU also had 3 graduating players- Francis Saura, Madz Gampong and Kim Malabunga who all closed their UAAP careers with a title while Solis and RJ Paler played their final UAAP game for FEU.
The Tamaraws emerged as the first runner up while the Blue Eagles settled for 2nd runner up.
The Scores:
NU (3)- Bagunas 35, Natividad 9, Malabunga 8, Almendras 7, Saura 6, Gampong 5, Retamar 3, Ancheta 1, Marcos (L)
FEU (1)- Solis 18, Bugaoan 11, Garcia 11, Quiel 11, Paler 11, Suarez 4, Silang 1, Calado 0, Lorenzo (L), Barrica (L)