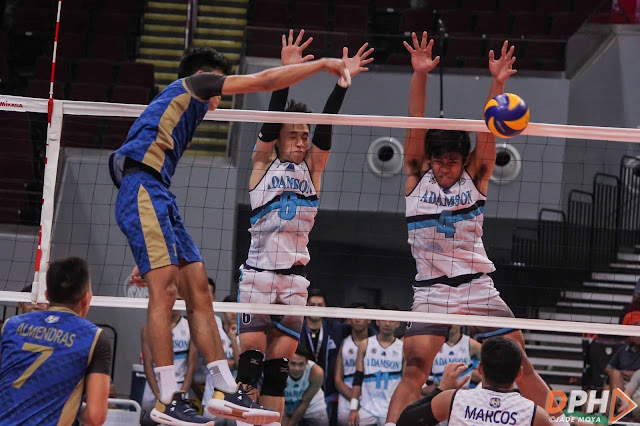 PASAY CITY- The National University Bulldogs are again back in the UAAP Men's Volleyball Finals after dispatching the Adamson Soaring Falcons via sweep, 25-19, 25-16, 25-20 in their series today at the Mall of Asia Arena.
Going into the Final Four, the Bulldogs won 13 games in a row after dropping their first game against FEU Tamaraws to finish the elimination round at the top of the standings and holds a twice-to-beat advantage over the 4th seeded Falcons.
Soaring Falcons open up the match with a strong start but the Bulldogs slowly got their groove back and holds an 8-point lead at 22-14. Adamson tried to came back but the Bulldogs has a lot of spaces to offer and snatch Set 1, 25-19.
NU takes full control of Set 2 as the Bulldogs showed their defensive stance that gave the Falcons a hard time to set-up their plays to go full destruction, 25-16.
Unforced errors haunt the Soaring Falcons in the third set while the Bulldogs shuts down every attack attempts of Adamson. The Falcons continue to breath as the Bulldogs commits consecutive errors in the latter part of the set but championship composure and maturity prevails, 25-20.
Kim Malabunga shows no mercy after over-blocking the Adamson squad and dropping 16 points- 7 attacks, 8 blocks (half of the 16 blocks by the Bulldogs) and an ace.
"Siyempre kailangan pa rin namin itaas and intensity namin. Yung blocking and attacking pati na rin yung mindset ng mga bata para makuha naming muli yung championship," Coach Dante Alinsunurin said in the post-game interview.
NU will face the only team who gave them a loss in the season, the FEU Tamaraws in the Best-of-Three Finals starting on May 11 (Saturday), 12 noon at the Smart Araneta Coliseum.