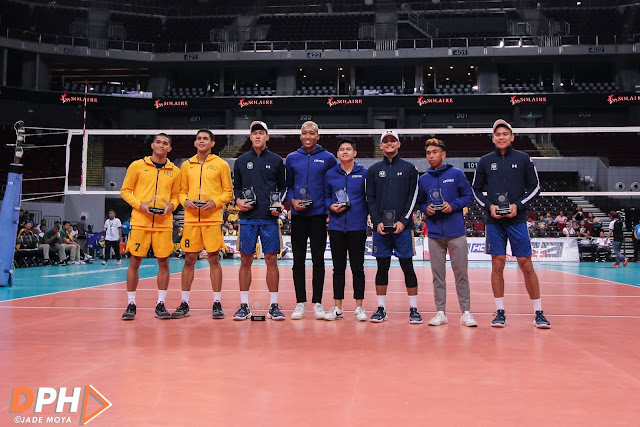 Bagunas, who is one of the four graduating players of the Bulldogs, also capped the- 1st Best Outside Spiker tallying 245 spikes with 53.49% attack efficiency & Best Server with 21 aces, 0.47 average per set.
Two more Bulldogs are commended namely: James Martin Natividad who got the Best Opposite Spiker award as he ranked 3rd in serving (0.24 APS), 5th in spiking (42.92% attack efficiency), 6th in digging (2.42 APS) and ranked 22nd in total scores with 127 points. On the other hand, Angelo Nicolas Almendras was hailed as the Rookie of the Year placing 8th in spiking with 38.93% attack efficiency, 10th in blocking with 0.47 average per set and 16th overall in scoring with 144 points.
UAAP 81 MV Runner's Up Jude Garcia and John Paul Bugaoan got the 2nd Best Outside Spiker and 1st Best Middle Blocker for the Tamaraws. Garcia was behind Bagunas in the MVP race with his averages- 2nd in blocking (0.65 APS), 4th in serving (0.23 APS), 6th in spiking with 41.04% attack efficiency, 9th in receptions (50.45% efficiency) and overall 9th place in scoring with 188 total points. Meanwhile, Bugaoan also placed 2nd in spiking with 48.77% attack efficiency and 5th in blocking with 0.58 average per set.
Blue Eagles' Chumason Njigha, Lawrence Gil Magadia and Manuel Sumanguid III also got their respective individual awards. Njigha who was the 2nd Best Middle Blocker has an average of 0.63 blocks per set for rank 3 and placed 11th in scoring with 158 points. Magadia leads in setting with an average of 8.13 sets to get the Best Setter award for the Blue Eagles- 6th straight for Ateneo after five-time Best Setter Awardee Ish Polvorosa. On the other hand, Sumanguid got the Best Libero after ending the eliminations in the top spot of digging with 4.58 digs per set and second best in receiving with 64.09 efficiency.
Bagunas was also named as the Finals MVP after scoring 53 points in their two games.