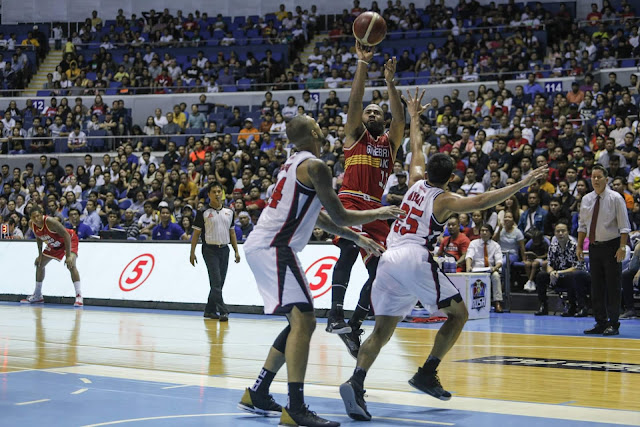 Stanley Pringle played as if he did not come from an injury and led the Gin Kings to their fifth win in the conference against four losses, scoring 27 points, 15 of which were scored in the first quarter alone.

"We came out with a lot more fire. I thinks our guys buckled down a little bit, we tried to keep Stanley [Pringle] more involved in the second half, and tried to use him along with Justin together down the stretch and that created shots for LA [Tenorio]," Coach Tim Cone said.

Outside shooting worked for the Gin Kings, with Tenorio connecting 6 out of 8 shots from beyond the arc.

Pringle, on the other hand, made 3-of-5 from the three-point area.

Chris Banchero led Alaska's scoring, making a total of 29 points, 18 of which came in the first quarter as well, but the team failed to sustain an early fourth quarter storm.

Alaska succeeded in chasing Ginebra's lead at the start of the fourth quarter.

Carl Bryan Cruz's triple with 10:22 left in the game paved the way for the Aces to cut the Gin Kings' lead down to only three points.

Kevin Racal then powered through picking up a loose ball off a teammate's miss to cut the lead down further to a point, 90-89.

The Aces were able to steal the lead away from the Gin Kings, through JV Casio's basket.

However, Ginebra was able to regain their lead and extended it to as far as eight points, 103-95, and the team never looked back from there.

Alaska slid down to seventh place at 4-5.