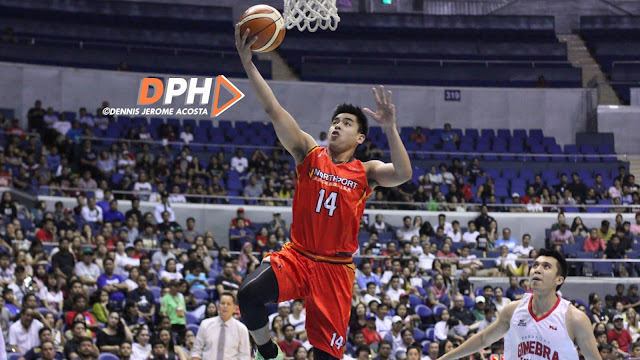 PASAY CITY - On the day that NorthPort took on Blackwater at the Cuneta Astrodome, there was one Batang Pier spotted on the bench in civilian clothes, has a cast on his left leg and could not walk without crutches but still went out to support the team, Jonathan Grey.

Grey met a freak accident that tore his patella tendon while in training.

The injury would keep him at the sidelines for 10-12 months.

At first, Grey was in denial about what happened to him, he does not want to stop playing because he wants to give the best that he can contribute for NorthPort.

While he will be limited to being NorthPort's sixth man in the meantime, Grey said he will be focusing on improving himself—an "overhaul" at that thought.

After it went abuzz that he is out due to injury, fans, teammates and fellow players from other teams had expressed an outpouring support on social media, something that Grey is very much thankful for because it gives him the motivation to move forward into working on the better version of him.

At the moment, Grey's function is very limited.

Since the cast on his left foot hinders him to drive, he cannot visit the team practice at Green Meadows nor come to that game NorthPort played against Rain or Shine to support the 8-man Batang Pier.

Perhaps Grey missed the team a little too much that he really pursued going to the game and support the team, with him being accompanied by someone.

Seeing his team play with the newly-acquired players coming from the trade with Ginebra, Grey has nothing but good words to say about Sol Mercado, Jervy Cruz and Kevin Ferrer.

In parting, Grey wishes nothing but the best for NorthPort as he watch his team from the sidelines.

He knows that a lot of things will still happen to the team moving forward in the conference and that he is one with them in the goal of hopefully getting that top seed at the end of the eliminations.

He knows the fact that NorthPort is a potential contender at the Commissioner's Cup, but he was also too quick to say that he does not want to be too complacent about it.

He may be forced by his injury to stay at the sidelines, cheering for his teammates but Grey assures NorthPort fans that he will come back better and stronger.