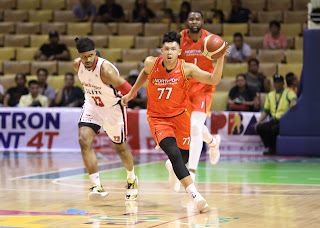 Pasay City - On the night that Kevin Ferrer debuted in the Batang Pier jersey, he already made a statement that he is out there to help NorthPort in continuing their winning streak.

Ferrer, along with Sol Mercado and Jervy Cruz only had two days of practice with North Port prior to playing their game, Saturday night at the Cuneta Astrodome. The trio combined forces and took advantage of an import-less Blackwater Elite to lead NorthPort to its fourth straight win - their seventh win in eight games.

His performance on his first game with NorthPort garnered him the best player citation as he tops all Batang Pier scorers with 23 points, 5 rebounds and an impressive 4/4 shooting from the free throw line.

His familiarity with Coach Pido Jarencio's style of coaching did play a factor for Ferrer to bring out his A-game. It also played a huge role that Jarencio sat down with him to talk.

Two days may be short a time for him, Mercado and Cruz to adjust to their new environment, but Ferrer says they're not having a hard time as the rest of the team had been so welcoming.

Moving forward, he aims nothing but to contribute his best for NorthPort one game at a time and impart his championship experience to his new teammates.