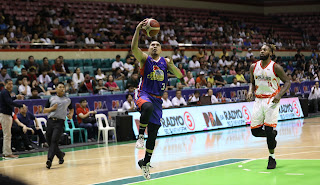 Pasay City - Paul Lee delivered a stellar performance for the Magnolia Hotshots to edge out the raging Phoenix Fuel Masters; 99-93, Saturday night at the Cuneta Astrodome.

"I expected it’s a dog-fight, it’s a grind out game. We knew that Phoenix is a strong team, it’s a defensive type of game. Thanks to my players, they stepped up big on the defensive end and we executed better in the second half in terms of our defense and our rebounding and also we execute on our offense with that extra ball movement. Maganda, especially our guards, they’re playing very well. Our bigs also are stepping up," says Coach Chito Victolero

Magnolia and Phoenix were almost inseparable in the opening quarter with the Fuel Masters taking the front seat; 23-24.

Second quarter told a different story as Magnolia's defense worked for them to outscore Phoenix.

With over ten minutes to play in the third period, Lee attempted on a triple but missed the shot, but James Farr was in the right position to pick the ball for a put-back.

Farr was fouled by Jason Perkins on his ascend which earned him a trip to the free throw line for a bonus shot that eventually gave the Hotshots a 4-point advantage; 54-50.

Despite the back to back shots made by Farr to give the edge for the Hotshots, it was threated when Richard Howell scored a triple to cut the lead down to only a point; 58-57.

Phoenix suffered a huge blow with 3:27 left in the third quarter when Ron Dennison was thrown out of the game, as he was slapped with a flagrant foul penalty 1 and a technical foul.

Farr took the free throw off the infraction and converted for Magnolia, 66-61.

Third quarter sealed off with the Hotshots on a 4-point edge; 71-67.

Magnolia lead as much as 11 points with 3:24 seconds left in the final quarter as Rodney Brondial completed a three-point play off a foul from Perkins.

The Fuel Masters just simply won't give up the fight even in the dying seconds of the fourth quarter as Alex Mallari was able to intercept a play by the Hotshots to find an open Matthew Wright to complete a fast break and cut the lead down to 6; 94-88.

Justin Chua completed some crucial free throw shots as he was fouled by Farr, sinking both free throws to tally in a 96-90 score.

Phoenix's attempt to stop the clock brought them to penalty situation on which Mark Baroca was able to convert from the line.