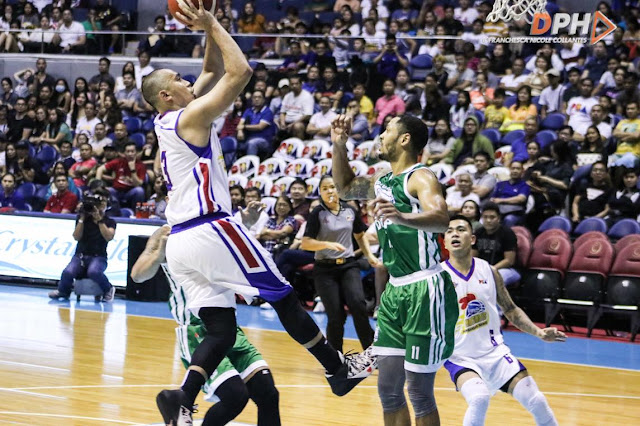 QUEZON CITY - The Magnolia Hotshots finally found their pace with their import, James Farr as they defeated the Columbian Dyip, 103-100, in the PBA Commissioner's Cup Sunday afternoon at the Smart Araneta Coliseum.

"Medyo mabigat lang sa amin kasi we have back to back to back games. [I'm] happy kasi kahit papaano naka two out of three kami dun sa aming schedule. We look forward talaga at least na maka 50 percent kami towards the break and then we have a good break then our next game is on Saturday," Magnolia Head Coach Chito Victolero said after the win.

The opening quarter saw a couple of lead changes between the two teams, not wanting to be outclassed by the other.

However, Magnolia was able to battle its way to a 6-point advantage at the end of the first period, 34-28.

The second quarter still told the same story, but the period saw Columbian going fiercer as they were able to chase Magnolia's lead.

Andreas Cahilig's triple with over seven minutes left to play allowed Columbian to tie the ball game at 38-all.

Columbian momentarily sailed away by 5 points through Rashawn McCarthy's triple only to give in to another tie at 50-all with 3:13 left in the game with Justin Melton's triple.

Jio Jalalon tried to give Magnolia the edge before closing the quarter out, but his attempt on the attack was blocked by Lester Prosper with only one second left to play.

Eventually, the final buzzer sounded with the game at 52-all.

It was Paul Lee's triple that paved the way for the Hotshots to sail away from the tie and hand the lead over to them by 2 precious points; 64-62.

With 6:48 left to play in the third period, Jalalon broke out and completed a fastbreak to further extend the lead to 6, 68-62.

The Hotshots totally took command of the ball game, leading as much as 15 points through a three point shot fired by Mark Barroca.

Third quarter ended with a 12-point advantage by Magnolia; 85-73.

The final quarter saw a more determined Hotshots, with them winning over second chance points and assists, one of which was an impressive assist coming from Rome dela Rosa, who found Ian Sangalang for a field goal, easily giving Magnolia a safe lead of 10; 94-84 with 7:40 left to play.

Few minutes shy from the final two minutes of the ball game, Baroca had to battle the much taller Lester Prosper to power his way through the basket and give the Hotshots a 101-91 tally.

Sangalang and James Farr finished off the ball game with 22 points each.