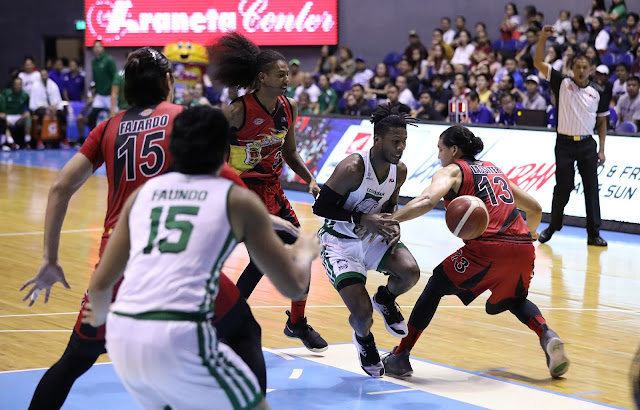 
QUEZON CITY - A hard-fought battle merited a good win for the Columbian Dyip as they defeated the San Miguel Beermen in overtime, 134-132, Sunday night in the PBA Commissioner's Cup at the Smart-Araneta Coliseum.

"I give credit to the players kasi even though we were losing, three or four straight, andun pa din sila. I talked to them going to this San Miguel team, [telling them that] this is a champion team, sabi ko if we play together, if we play in patience in our offense, if we play hard on defense, nothing is impossible, matatalo namin [sila]. Ayun nga yung kinalabasan ng game," said Columbian Head Coach John Cardel.


The Dyip got off to a good start as Prosper got his scoring groove going at the start of the first quarter, giving Columbian a lead as massive as ten points, 27-17.


The opening period eventually closed with the Dyip enjoying a 7-point advantage; 33-26.

San Miguel was eventually able to cut the lead to 2, 35-33, at the early goings of the second quarter.

Shots from beyond the arc also featured on the quarter, with Von Pessumal scoring back to back for the Beermen and was later on followed by Lester Prosper, Ronald Tubid and Andreas Cahilig.

Despite such efforts coming from the Beermen in the third period, the Dyip remained strong and were able to hold on to their stance at the lead at the end of the period, 88-82.

In the fourth period, however, the Beermen slowly crawled back, and Arwind Santos sank a triple with only 1.5 seconds in the ball game to tie the ballgame and eventually sent it to overtime.

Columbian's outside shooting killed the Beermen's defense in the extra session as the team eventually escaped with the win.