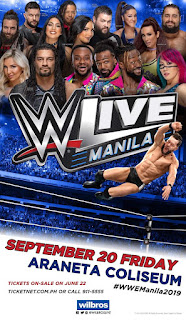 BIÑAN—The World Wrestling Entertainment will once again stage a house show in the Philippines on Sept. 20.

As announced by organizer Wilbros Live on Wednesday, the WWE will hold a wrestling event at the Smart Araneta Coliseum in Quezon City.

Wilbros will release the final lineup of the wrestlers who will come for the event at a later date.

Ticket selling will start on Saturday.