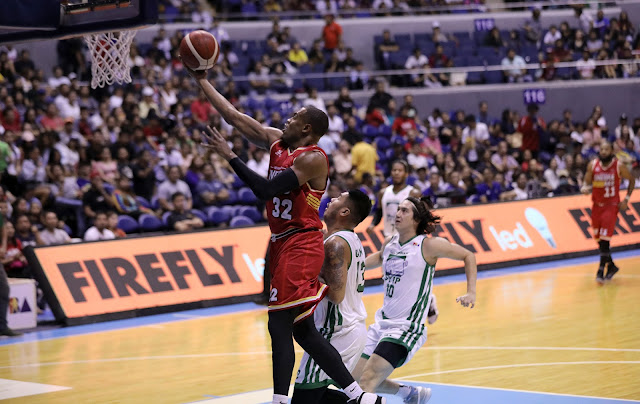 Quezon City - Barangay Ginebra Gin Kings needed 5 extra minutes to seal off their Sunday night with a win over the Columbian Dyip; 127-123 at the Smart-Araneta Coliseum.

Justin Brownlee finished off with a career-high of 50 points to lead the Gin Kings to victory despite the game being a non bearing one.

Columbian sets the pace of the game as they lead as much as 10 points to seal the first quarter in at 23-33.

Despite Ginebra outscoring the Dyip 28-22 at the second quarter, they continued to trail by 4 points at the half, 51-55.

The second half, on the other hand was a showcase of baskets after baskets as both teams exchanged leads as well.

Columbian Dyip even held Barangay Ginebra chasing them as they went on for a 5-0 run through a slam dunk by Lester Prosper and a triple coming from Glen Khobuntin with 3:09 remaining in the ball game.

However, the Dyip is to lose one player due to injury as Russel Escoto was left sitting at the area in front of the official's table, seems to have hurt himself off the recent play when Ginebra had the ball possession. Officials had to call a time out to assess Escoto's status, who was given immediate medical condition. 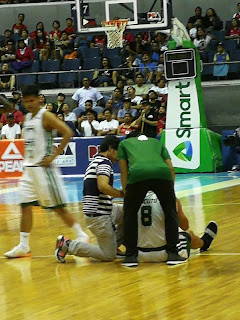 Russel Escoto being assessed by medics in an apparent shoulder dislocation. Photo by Xy-Zha Cabanlong

Escoto was later on taken to the dugout to receive medical attention and was unable to continue on with the game it heads on to its final quarter.

Third quarter ended with Columbian still having a 3-point advantage over the Gin Kings; 82-85.

As expected, fourth quarter was again a fiasco of baskets coming from both teams, including an exchange of three point shots coming from Andreas Cahilig and LA Tenorio and a showcase of slam dunks courtesy of Japeth Aguilar and was answered back by Prosper at the return of play in the Columbian side.

The game could not be decided at regulation as both teams were tied at 113 on its supposed final buzzer.

The extra five minutes of play opened up with both teams engaging in another deadlock but Brownlee's triple with 54.4 seconds remaining in overtime allowed the Gin Kings to finally get their pace coming into the direction where they wanted to go.

"That might be the best non-bearing game in PBA history. It's best I've ever been a part of, neither team wanted to give in, we wanted to create some momentum coming to the playoffs. Whether we win or we lose this game, we're going to be 4th seed so this game really has no bearing but we really wanted to just continue our momentum, try to continue to integrate Stanley [Pringle] in what we are doing and work on our defense," says Coach Tim Cone after the match.

The Barangay Ginebra Head Coach has nothing but good words to say about the Columbian Dyip as they were able to give the Gin Kings a good fight despite the game having no bearing at all in either teams' stature in the Commissioner's Cup standings.

"I tell you, that team [Columbian], that whole team is a team of big shot makers. They make big shots, everytime we make a little bit of a run or we start to see if we can make some momentum or something like that, they come down and make a big shot. Whether it be Prosper, or Cahilig or [Rashawn] McCarthy and especially CJ [Perez] - I mean, there are guys out there who can really make big shots. They are a lot, lot better than people giving them credit for, they are really a dynamic team, they are a little bit thin, they're not as deep as that of the other teams but once they build their depth, they're going to be very, very tough. I was really impressed with their play today," Cone adds.

Best player of the game, Brownlee has also said his praise for Columbian as he faced the media after the game

"Columbian came out and gave us a great effort. Their import, Prosper, was unbelievable, getting three pointers all over the place and he really made it tough for us tonight. But we just tried to keep on fighting, trying to do what they are doing and staying aggressive. We tried to come out here and play as if it is the playoffs, we just tried to keep our rhythm. We don't want to relax and keep the winning streak going," says Brownlee.

The Gin Kings are set to face either the San Miguel Beermen or the Magnolia Hotshots in the playoffs.